Spawning on the mesh

After creating the new effect in the content browser, and firing-up the particle editor, the first thing we'll do is to load the mesh it is meant to spawn on as a backdrop.

This will make it easier to visualize the effect in its real-world environment: 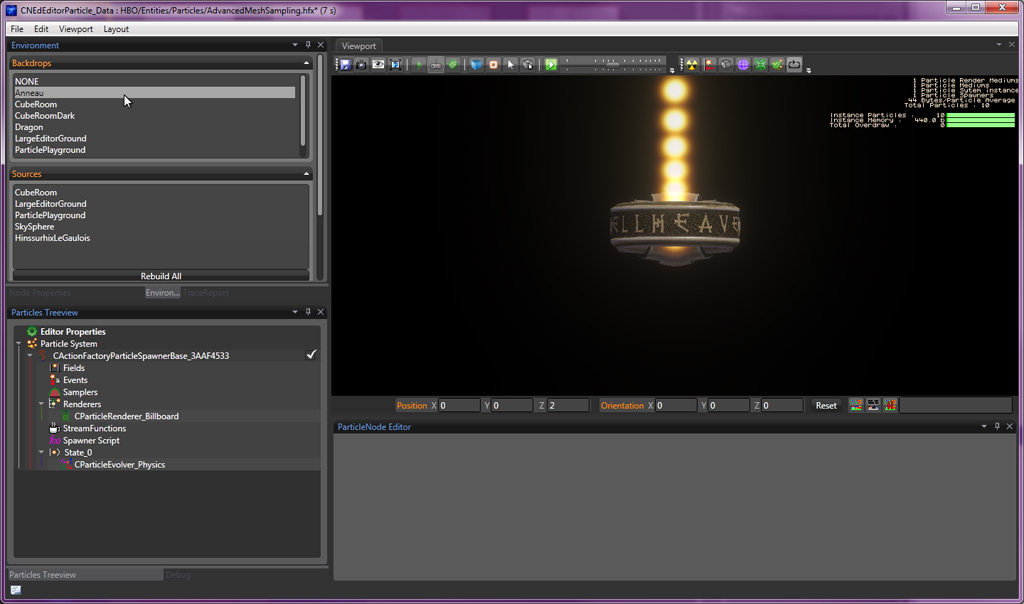 We want to make the particles spawn on the mesh surface. In order to do this, we'll first create a new shape sampler: 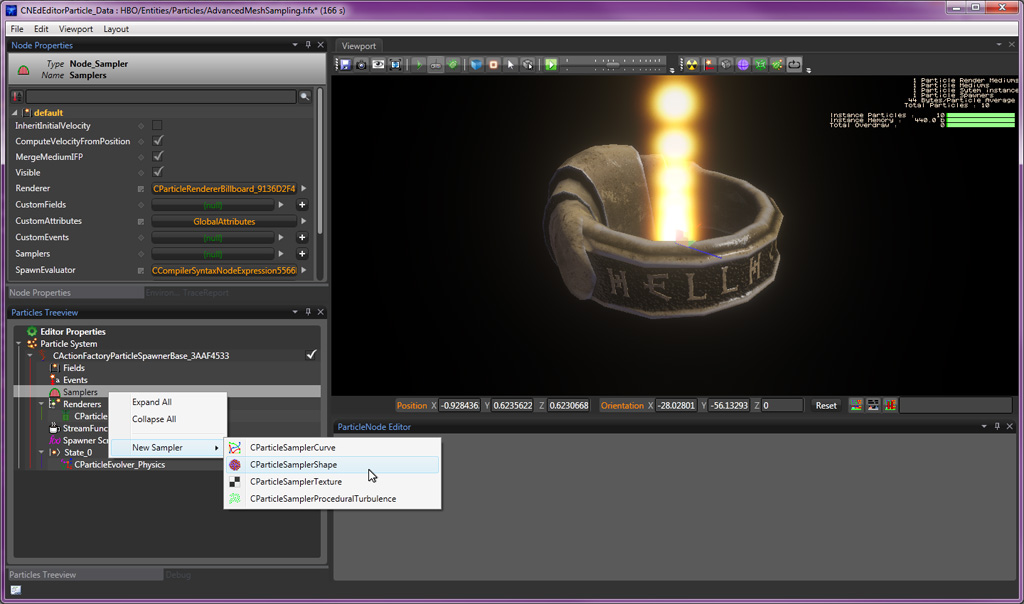 Set its type to 'MESH'.
After setting the mesh path, we can check everything went allright by toggling the show shapes debug button.

The displayed shape mesh should match the backdrop perfectly: 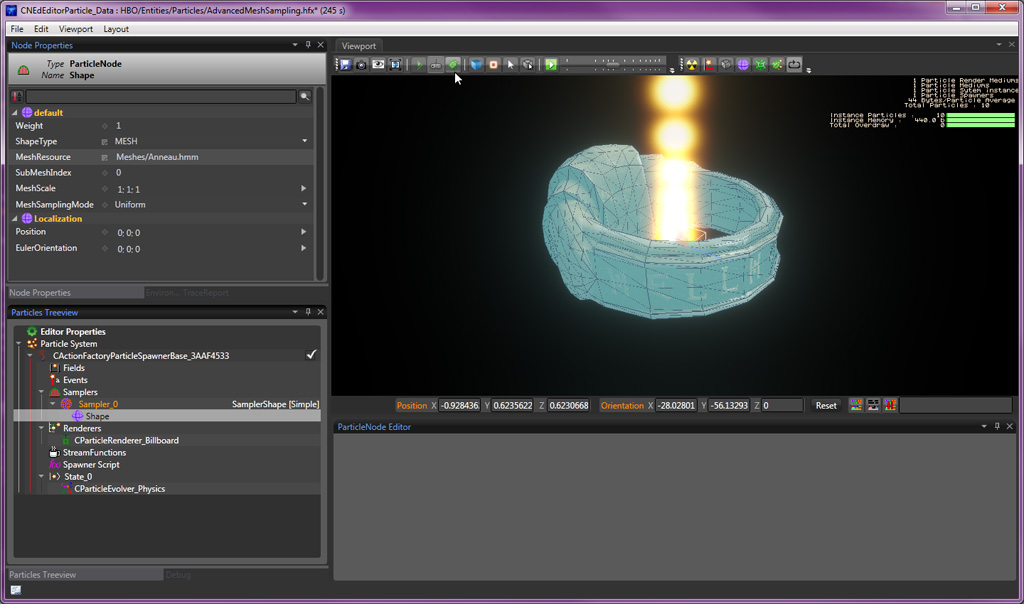 Now, nothing has changed yet, and the particles still spawn at the origin, and form a continuous vertical rising column (due to the {0,2,0} constant acceleration in the physics evolver).

That's because we haven't told the particles to spawn on the mesh. To do this, we're going to select the 'Spawner Script' node, sample the shape's positions, and set the particle position to the sampled value:

Note that if you renamed the sampler to, for example: 'MyCoolMesh', you'd write:

We'll also shrink the particles a bit by setting the Size field to, for example, 0.005 units.
After saving the script, you should see tiny particles spawning on the mesh surface, and immediately rising up: 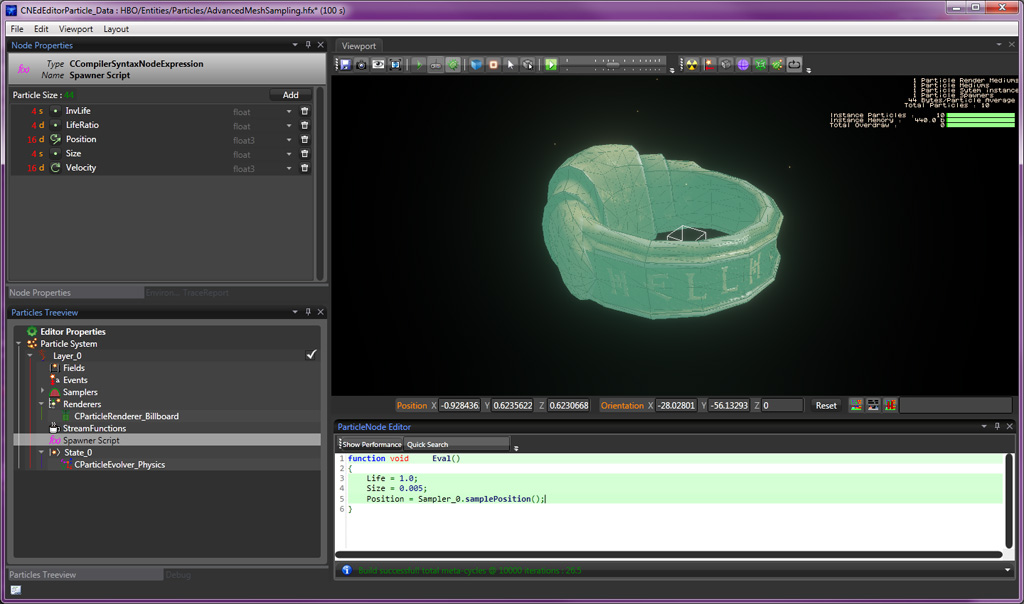 Now, for the next steps, we're going to significantly increase the particle count to better see what's going on in the mesh sampler.
To capture the images for this tutorial, I boosted the 'SpawnCount' field in the particle layer from 10 per second to 80 000 per second. That's a bit hardcore, but the runtime should be able to handle it easily.

Also note how the Performance budget indicators go overbudget, from green to red, and tell you there's perhaps too many particles: 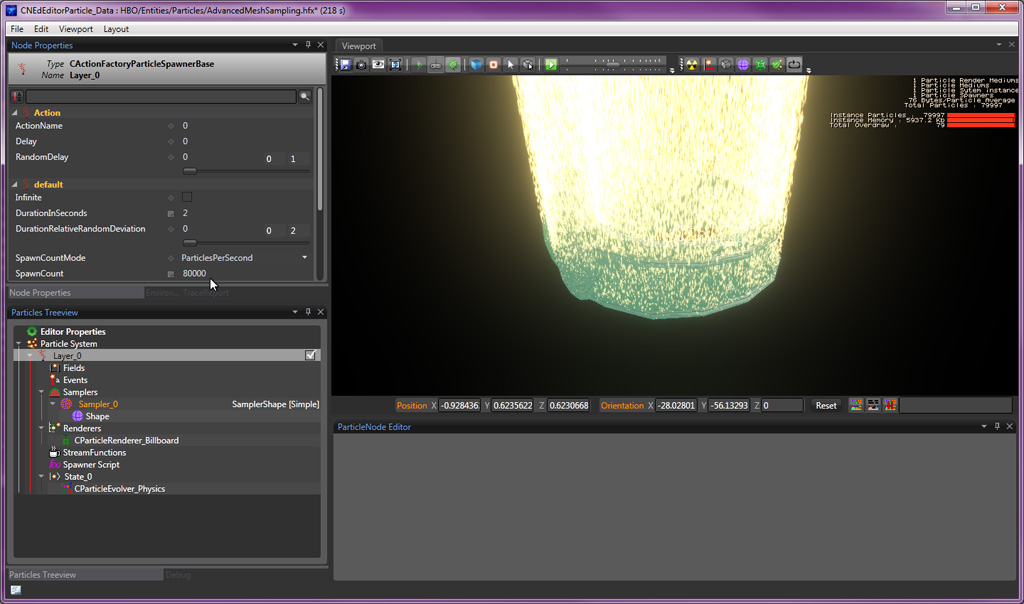 To make visualisation easier, we'll just quickly clear the acceleration field in the physics evolver and set it to zero. the new particles should stop moving and stay on the mesh surface: 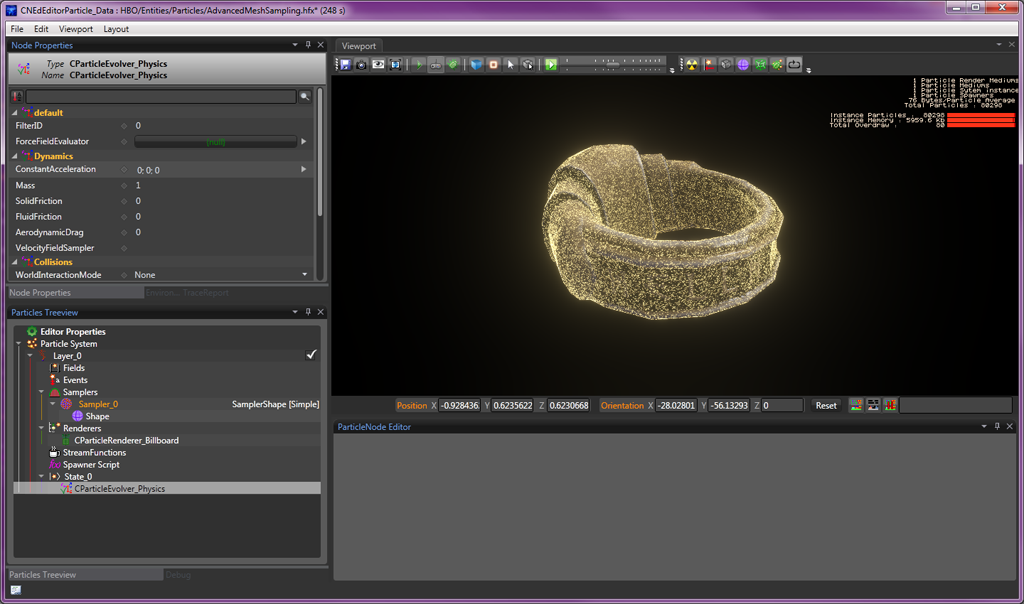 If you go back to the shape sampler, you can see there is a 'MeshSamplingMode' field, giving you two choices: either 'Fast' or 'Uniform'.

you can experiment and check what difference it makes. Basically the 'Fast' mode is.. well... faster than the uniform mode, and gives an equal spawn probability per triangle, whereas the 'Uniform' mode produces a constant spawn probability per area, but costs slightly more (both memory and performance-wise, but not that much in practise either).

What this means is:

Regardless of performance considerations, both modes can be interesting. You can use fast mode and a custom tesselated mesh to make the system spawn more particles on a specific area of the mesh.

All we did yet was to sample a single property of the mesh: Positions.
The shape sampler actually allows to sample The following mesh properties, if they exist:

The following functions are published as members of the sampler to the scripts, depending on the stream's availability:

Now, we're going to try moving the particles along the mesh surface normal, this should give the impression of a 'shell' around the mesh, made of particles.

To do this, we can try writing:

(The 0.1 scale is here just because the ring is a small object, and normals are normalized with a length of 1 unit, so it would move the particles too far).

However, it doesn't produce the expected result: 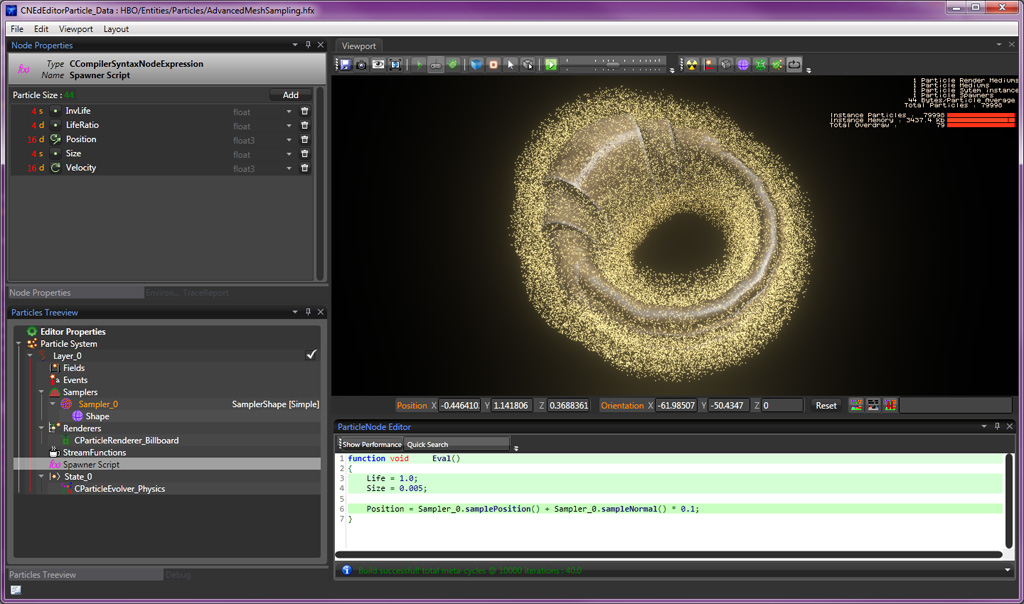 This is because the shape sampling is random. each call to a sample() function will sample the mesh at a different location.
Therefore, in the following line:

We need a way to tell the shape sampler to sample the two properties at the same point on the mesh.

To do this, we're going to have to use what we call parametric coordinates.

For meshes, the parametric coordinate has type 'int3', and can be retreived like so:

It is now obvious that it works as we initially intended, and we can clearly see the 'shell' around the mesh, formed by pushing all particles 0.1 units along the surface normal: 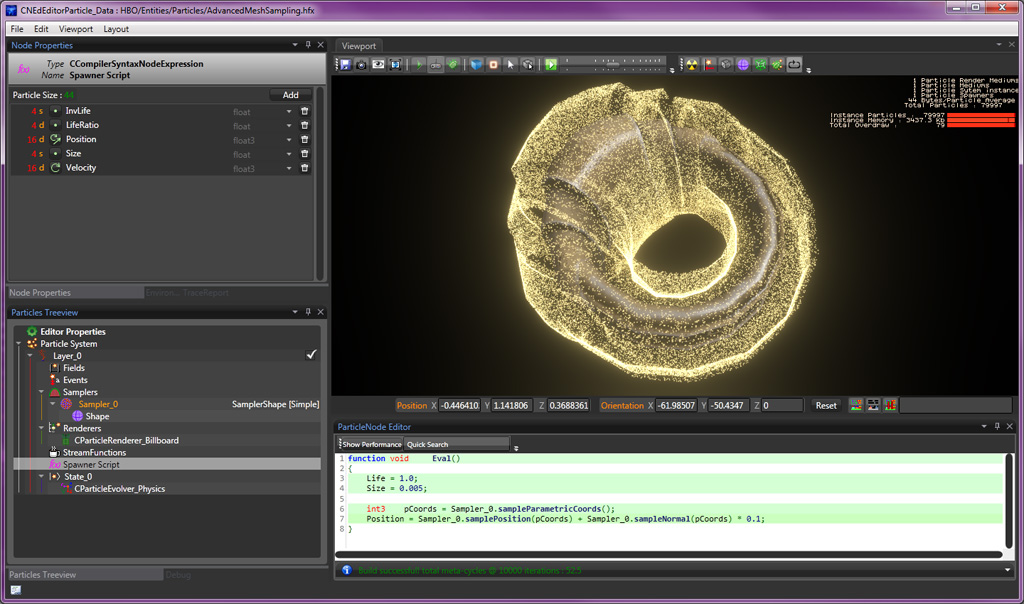 Now that the difference with/without parametric coordinates is visually clear, a more interesting thing to do with the surface normal is to initialize the particle velocity with it. this will make the particles "shoot out" of the mesh surface:

Before going further, we'll just quickly set the billboarder to 'VelocitySpheroidalAlign' to stretch the particles along their velocity, and empathise their movement: 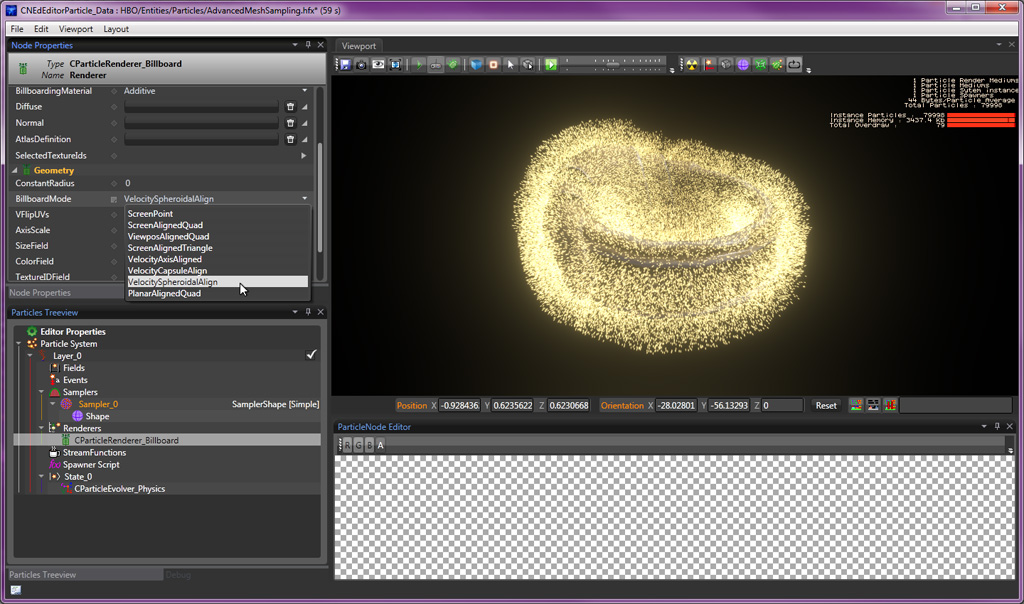 We're now going to see how to sample a texture using the mesh UVs, and use one of the texture color channels to tell make the particles spawn only on certain parts of the mesh.

Before that, we're just going to quickly add a curve to fade the particle colors: 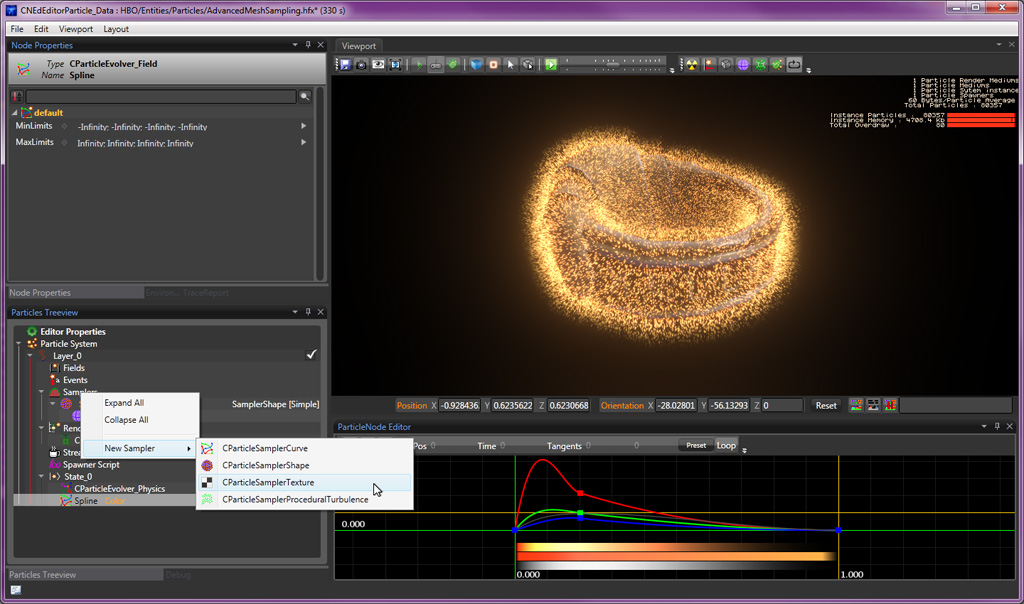 To add the texture sampler, right click on the 'Samplers' node, and select New Sampler > CParticleSamplerTexture. it will create a new texture sampler, under the already existing shape sampler.

Here is the texture we're going to use:

First thing, select the texture sampler, and click on its 'TextureResource' field. The texture resource browser will pop. Just pick the texture to use.


Note: if the texture doesn't appear in the list, you can try clicking 'cancel', explicitly rebuilding the resource registry by right-clicking in the content browser, selecting the 'Rebuild Registry' menu item, and re-opening the texture resource browser. 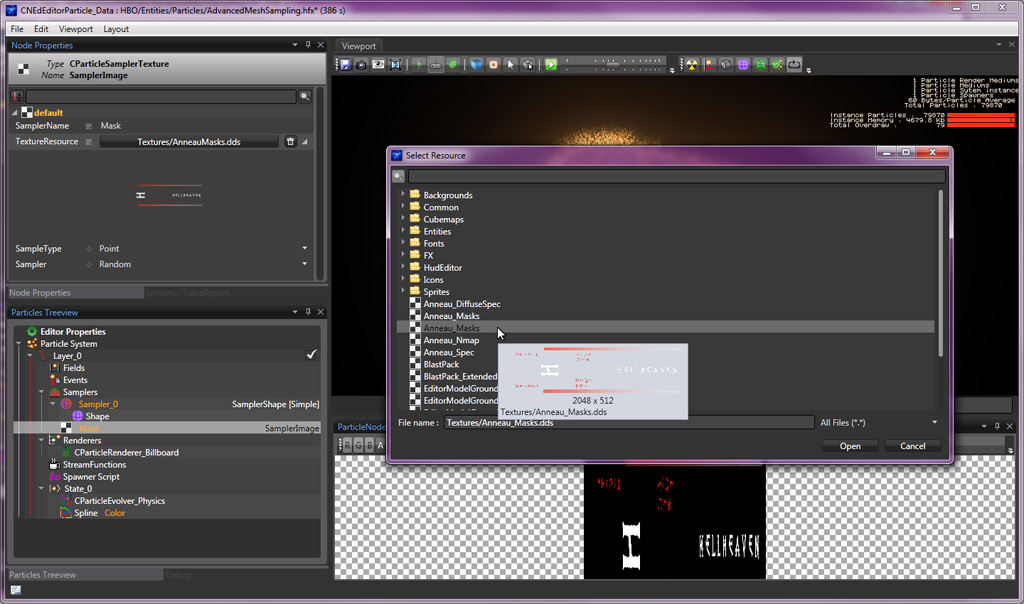 A view of the selected texture will appear in the particle node editor. You can toggle the 'R', 'G', 'B', and 'A' buttons to visualize the corresponding channels: 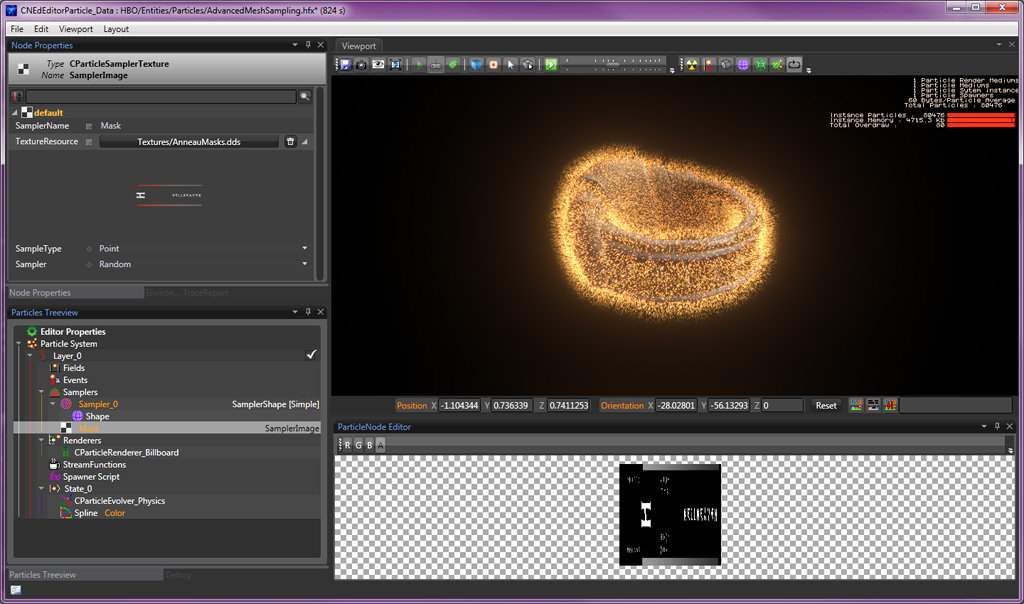 Back in the spawn script, to sample the texture, we first need the UVs to sample at:

This will create a temporary float2 variable named 'uv', and store inside it the mesh UVs where the particle was spawned.

A few things to note here:

Now, we've got the color in the spawn script, but we're not doing anything with it yet.

Something easy we can try is using one of the channels to scale the particle size. For example, to scale the size by the alpha channel, we'd write:

This effectively gives a size of zero to all particles that spawn on the mesh where the texture's alpha channel is zero, making them invisible: 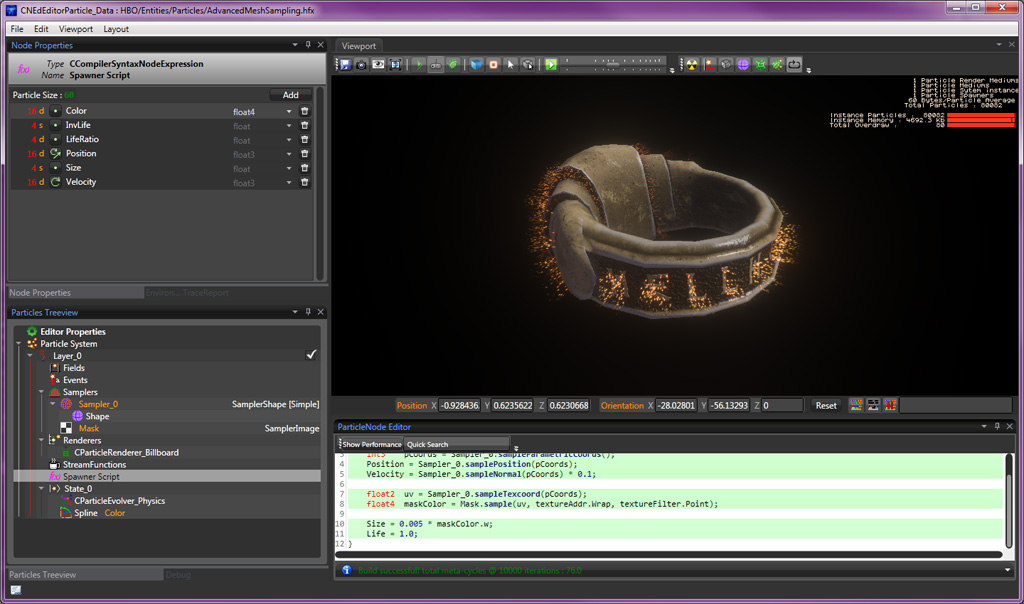 However, note that they are still there ! if you look at the counters on the top-right viewport corner, you'll see there are still around 80 000 particles alive at any given time.

A much better thing to do would be to scale the Life of the particles, this way, particles spawned in the black texture areas will have a life of zero, and won't even be emitted: 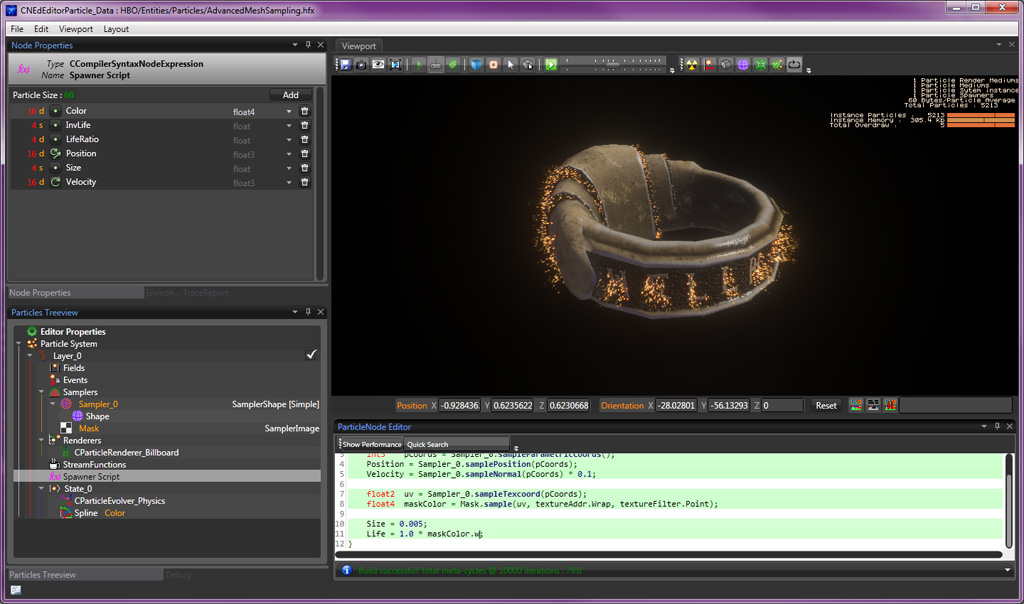 Note that in the above screenshots, there is a subtle visual difference between scaling the particle size and scaling the particle life. That's because the alpha channel we used doesn't only contain pure white and pure black, there are some light shades of gray in some places (the two large horizontal stripes), making the particles either a bit smaller or live a bit less time than in other places:

Now that we've got our texture sampling working, we can do other fun stuff like changing the particle color depending on where it's spawned.
We'll use the red and green channels to build a reddish color coefficient: {R, G, G} (the green channel is dimmer than the red channel in some areas, so this will make the color coeff more red in those areas)

However, as we already have a color curve that sets the color each frame, we can't just write in the spawn script:

Also bring the particle life up a bit, to 2 seconds 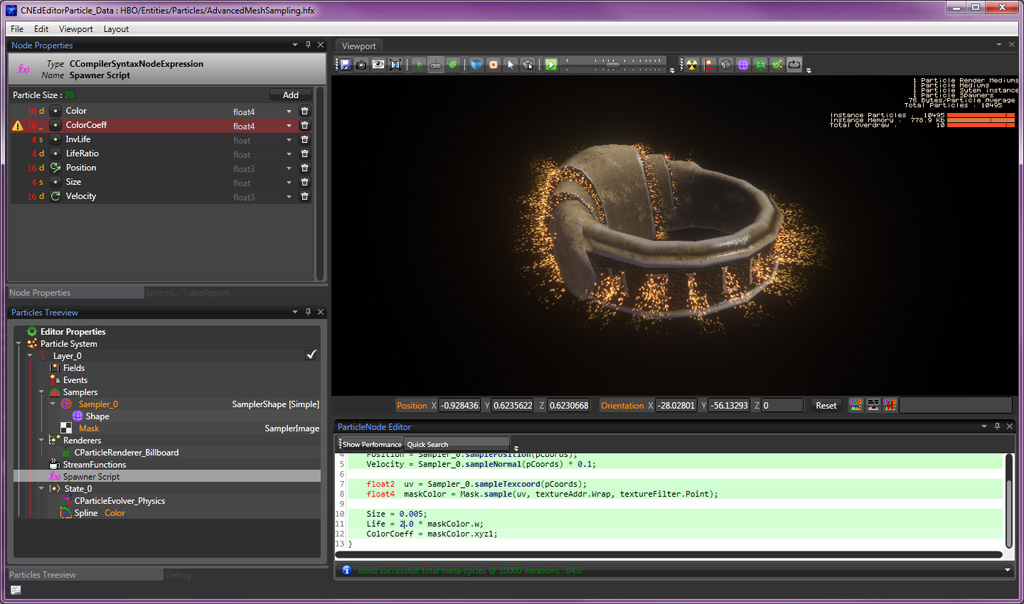 Note that 'ColorCoeff' appears in the particle field list with a red background and a warning icon. This is because it is considered by the system to be an unused field.
Basically, it is currently useless. We set a value into it, but it's not used anywhere. yet.

Right-click on the evolve state, and create an evolve script: 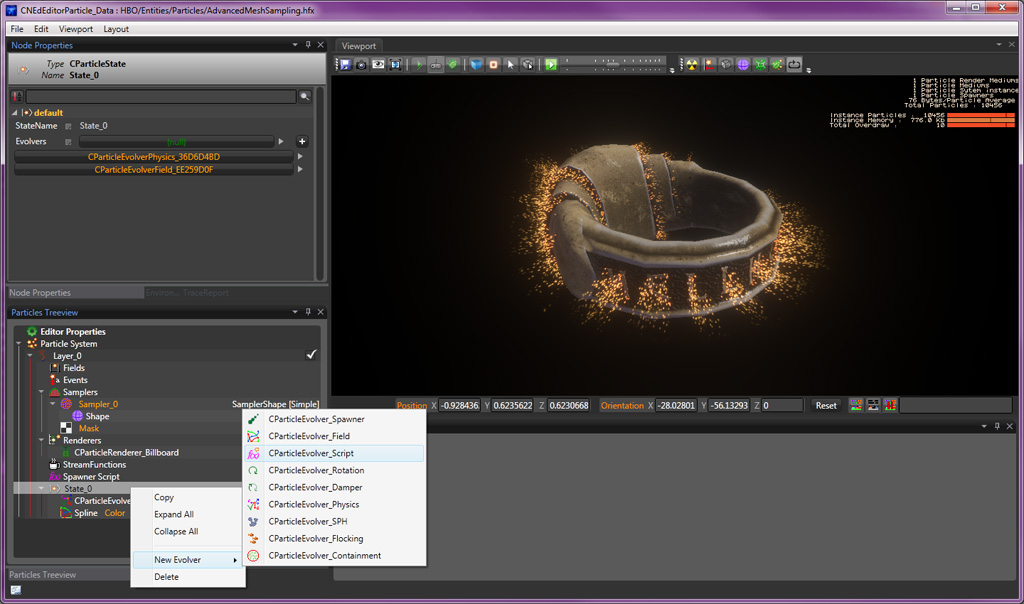 this is equivalent to:

Save the script, and you should see immediately the particles getting a reddish tint where the green texture channel was dimmer, namely, the horizontal stripes (that map to the spirals around the front of the ring), and the runes:

(Also note that the 'ColorCoeff' field isn't red anymore : it's not unused anymore, as we're now using it to scale the particle color) 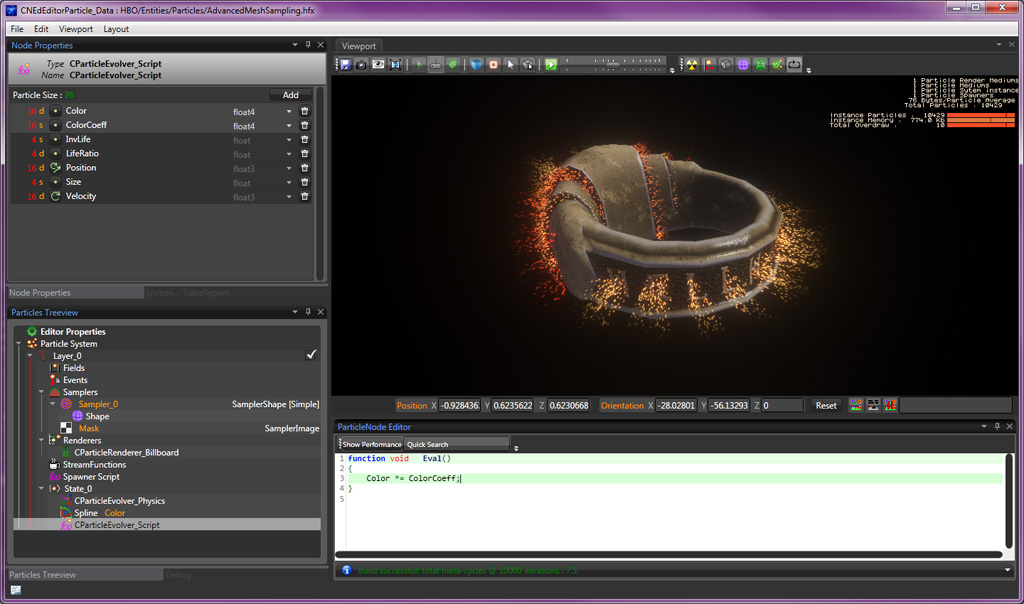 We can now also increase a bit the particle count for a denser effect. Here, I set it to 200 000 particles per second.
The number has to be that high because we're throwing a lot of them away, as there is a large portion of the mesh where no particles should appear at all. You can see that the real final number of particles is around 26 000, not 200 000.

Anyway, that's just for the tutorial's sake, you probably won't want to use that much particles in a real game anyway. 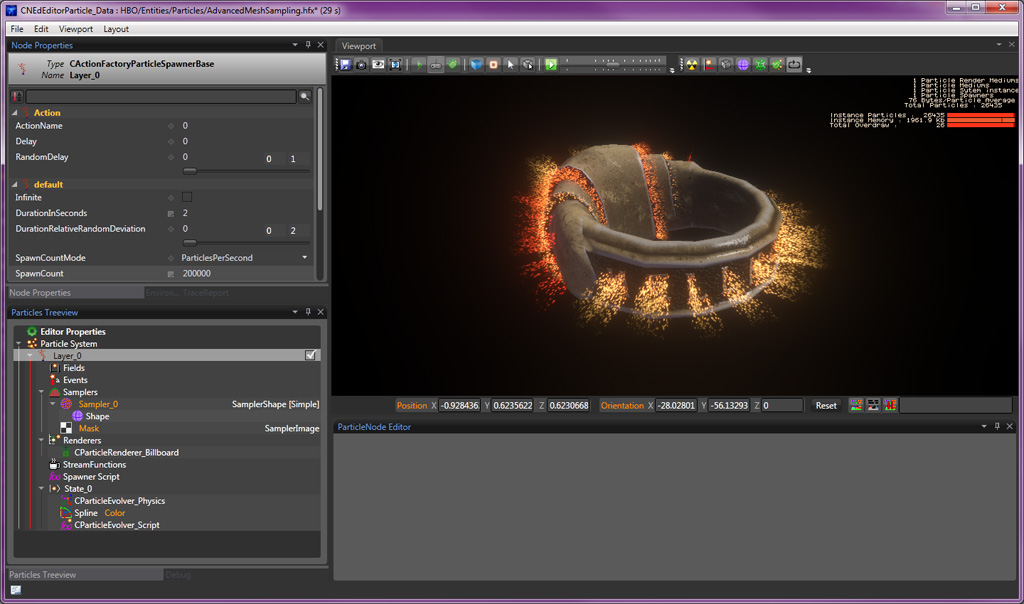 A small detail to note when looking at the particle emission pattern is that the velocity does not follow exactly the mesh facets. That's because the normal we sample is not the face normal, but the interpolated vertex normal. There is currently no way to sample the face normal in the mesh sampler.

If you really must sample face normals, you should still be able to do so by creating a mesh with unwelded vertices, effectively having 3 unique vertices for each 'facet'-like triangle. This can be easily accomplished by using smoothing groups in your modeling software. 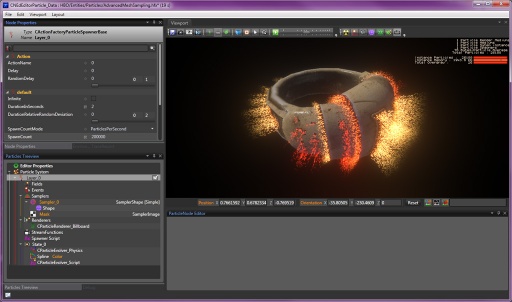 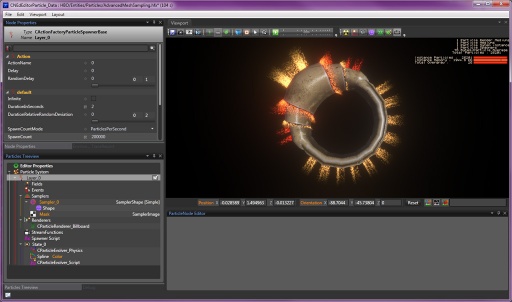 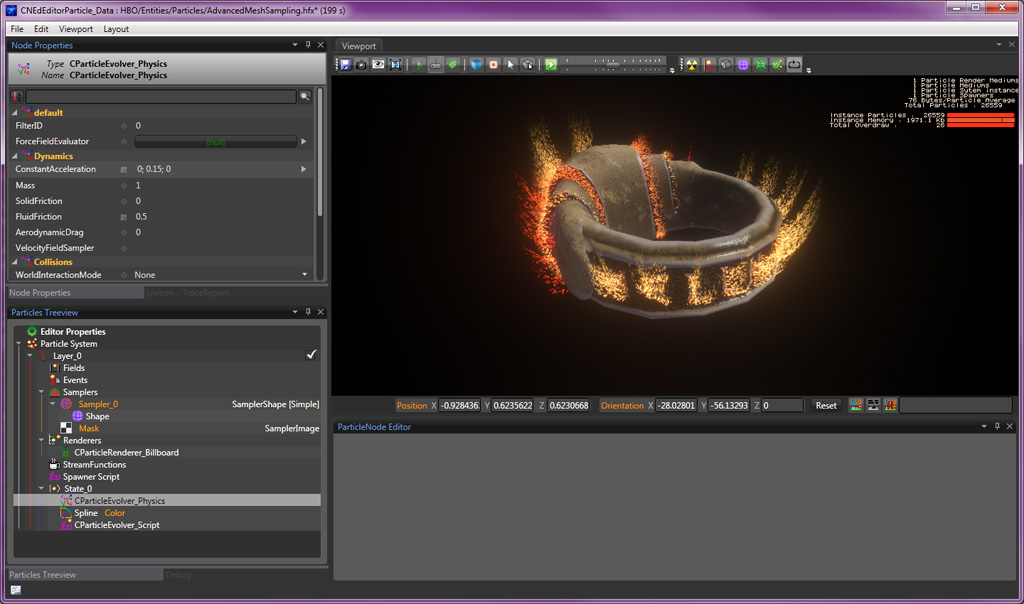 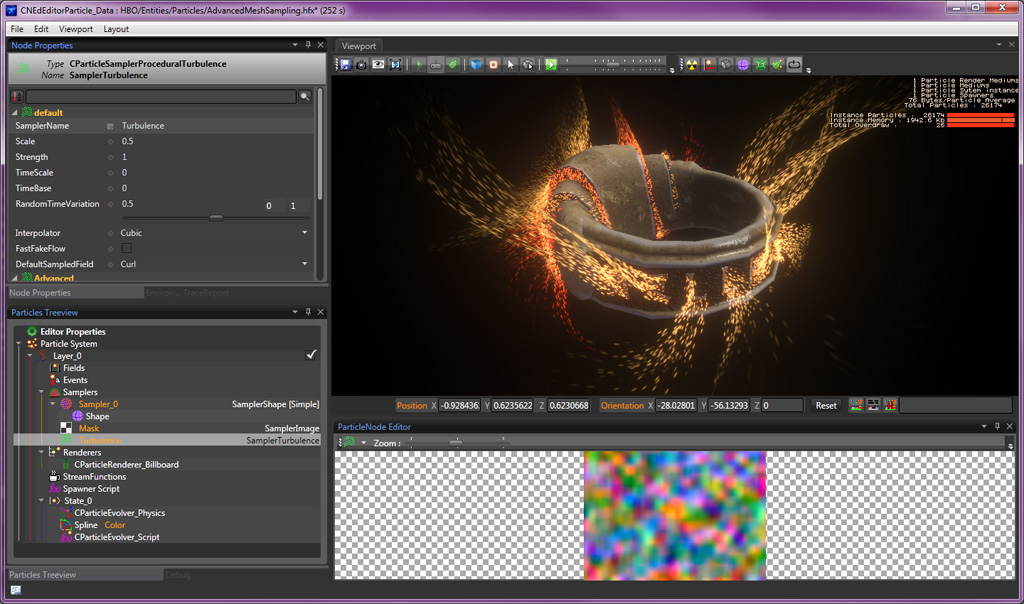 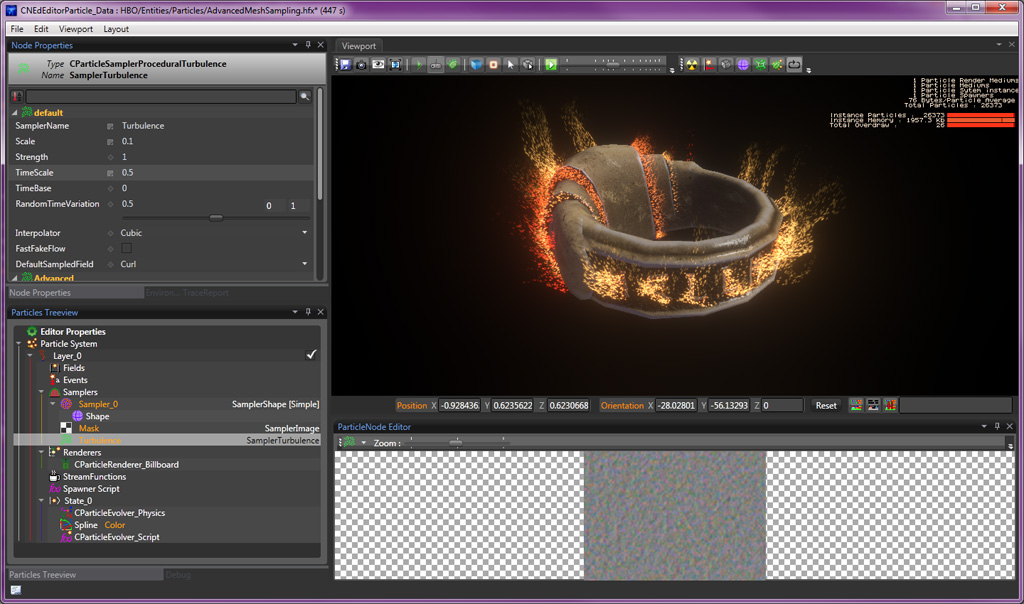 A final touch: make the particles spawning on the runes larger than the rest, using the Blue channel.
(The blue channel is white only on the rune's locations) 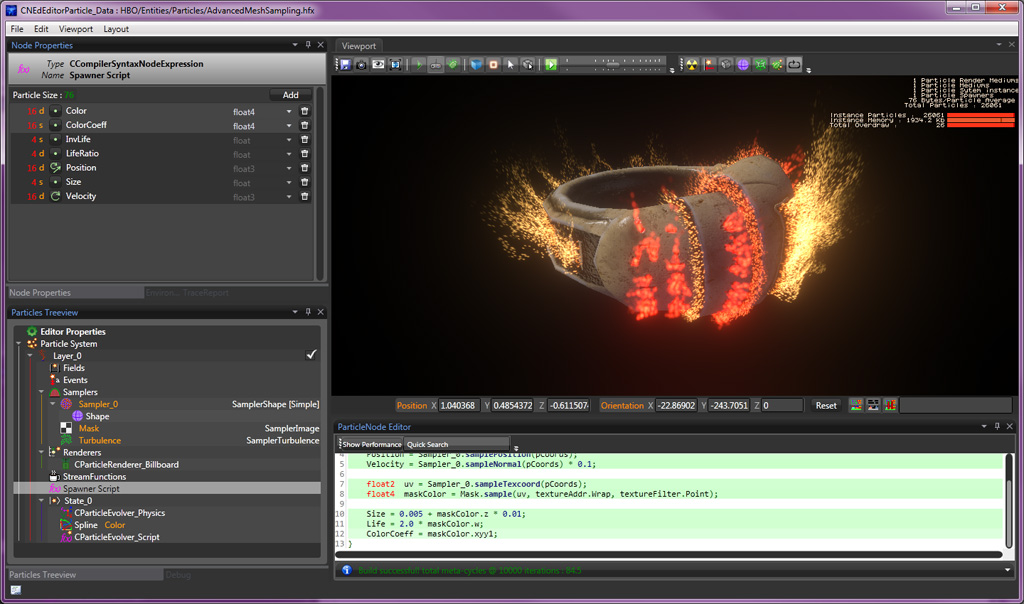 Here are the final scripts for the effect: