From PopcornFX
Revision as of 15:16, 5 July 2018 by Vbas (talk | contribs) (Created page with "Image:UnityPKFxFXComponent.png<br> This is the FX component, it holds the name of the effect, the attributes and the controls to the effect.<br> {| |Image:Unity-logo-g....")
(diff) ← Older revision | Latest revision (diff) | Newer revision → (diff)
Jump to navigation Jump to search 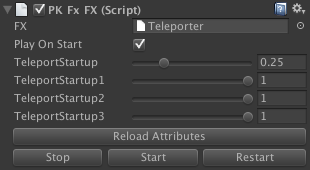 This is the FX component, it holds the name of the effect, the attributes and the controls to the effect.

FX
Holds the pathname to the pkfx file.
The file can be dragged and dropped from the Project view.
The file must be located in <project root>/Assets/StreamingAssets/PackFx/ (or a subdirectory) and have a .pkfx extension.
Play On Start
Set to true to start playing the effect when its Start() method is executed.
Attributes
If it has any, the effect's attributes will be displayed here. Their values are serialized with the assets so you can have prefabs or GameObjects in your scene saved with specific attribute values.
See also : Animating Effects Attributes
Samplers
Like for the attributes, if the effect has any samplers, they will be displayed here.
See also : Effect Attribute Samplers
See also : Animating Effects Attribute Samplers

If individual effects killing is disabled AND the SpawnerID field is disabled in your effect, this will return false as soon as the effect is done spawning its particles.
If individual effects killing is enabled OR the SpawnerID field is enabled in your effect, it will return false as soon as all of the FX instance's particles are dead.
The component is considered safe to delete (along with its GameObject) when this returns false. Although, avoid polling this function every frame, as native function calls induce overhead.

Checks if an attribute exists for this effect.
Checks for both desc's type and name.

If individual effects' killing is enabled, instantly kills the effect and all its associated particles.

Checks if a sampler exists for this effect.
Checks for both desc's type and name.

Stop the emission but continue to update the transform and attributes until the end of the effect.

Stops the effect and the associated updates.
This will also trash the attributes so if all particles haven't died already when terminating the effect they will sample the default attributes instead of the actual values.

You can set this delegate to a function of your choice that will be called when the effect stops. This will be called as soon as the "Alive()" method would return false.
/!\ This delegate isn't working in the compiled versions of the plugin, like the one shipped with the Packs available on the Asset Store (Discovery, Cartoon, Warfare).