All our packages on the Unity asset store can be found here: https://www.assetstore.unity3d.com/en/#!/publisher/8762?aid=1101lGAz&pubref=wiki
Our official thread on the Unity forums is here : http://forum.unity3d.com/threads/popcornfx-optimized-particle-effects-plugin.297938/
You can find the documentation for the version 2.X here : Unity

The PopcornFX Unity plugin is an integration of the PopcornFX runtime libraries in the Unity game engine.
It takes advantage of Unity's Native Plugin Interface and Unity's command buffers.

These are both identified by their version numbers and can't be dissociated (you can't take the native part from the 3.0 plugin and use it with 3.1).
The Asset Store packages are identified with the managed version number only.

The managed scripts are provided with each version of the plugin (desktop, ios and android) and should be exactly the same (so once you've imported 3.0 from whatever package, you only strictly need the content of Assets/Plugins/ from the other packages).
All 3.0 packages have the same managed assemblies. Only the different platform-specific native libraries are exclusive to each package.

Setup From A New PopcornFX Project

If importing for the first time / updating from a v3.0+

If importing from a project with v2.X

Particles can interact with static environment in Unity.
A "scene mesh" needs to be built. 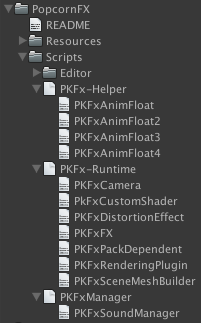 Not all features allowed by the PopcornFX SDK are implemented in the Unity plugin.
To see the current status of the Unity integration, see the Feature list.

This category has only the following subcategory.

The following 12 pages are in this category, out of 12 total.