A particle spawner allows you to add particles in the simulation. They are seen as particle layers in the editor treeview, and contain the whole definition of a particle layer.

See any basic Particle tutorials for more details on how to use this node. 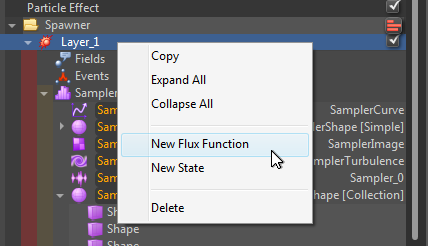 A "Flux Function" entry will be added in the treeview:

When selecting the Flux Function node, you can change the curve to control the particle flux:

Considering the following flux function: (high peak at the center that will produce a very high particle count)

Here we have an Fx with 8 layers that spawn a stream of particles using that flux function.
Each layer has a different 'SpawnCountRelativeRandomDeviation' that varies from 0.0 for the top layer to 1.0 for the bottom layer, producing increasingly chaotic streams.
The particles spawn at the left hand-side, move from left to right, and die on the right hand-side.
They are colored based on the spawner life ratio. When the spawner starts (life-ratio = 0), they are colored red. When it stops (life-ratio = 1.0), they are colored yellow.

It is easy to see the flux function pattern in the particle streams:

Here is the effect of changing the 'FluxFunctionTiledRelativeDuration' property from 1.0 to 4.0. The flux function will tile 4 times across the spawner's life:

Layer scripts allow you to control various properties of the layer _before_ it starts emitting particles each frame.
You can find the full layer-script reference on the scripting reference page

Layer spawn-scripts not yet available. In the current PopcornFX SDK you can only use layer evolve scripts.

In addition to all the above, you can also access the common properties available inside each script: Scripting_reference#Common_to_particle_and_layer_scripts

Example of a layer script:

This will map the emission rate (flux) to a sinewave based on the elapsed time.

Experimental support for simulation caches has been added in v1.11.0. This feature allows:

Our goal is to support any simulation software capable of exporting frames containing points and their attributes.

The .pksc file contains all the offline simulation frames, each one contains points and their attributes (Position, Life, ..). All points will represent a particle, and all point attribute will be converted to a particle field.

Once this feature enabled, the particle spawner will stops taking in account the base spawn rate and flux informations as the simulation cache becomes the particle emission source. Modifying the layer's Flux in a LayerScript will not affect the spawn rate either. 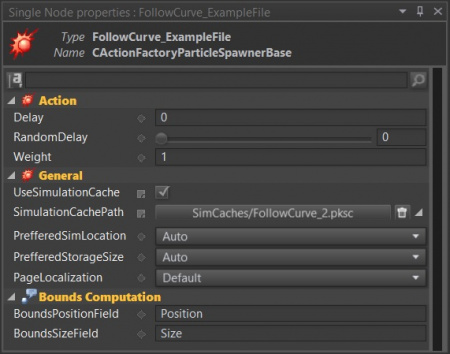 Particles will be emitted smoothly even if the source frame rate is low by interpolating to match the game's framerate.

Particle's Life shouldn't be assigned in the Spawner Script to something else than Life = infinity; as their lifetime will be handled internally based off the sim cache. However, this means that LifeRatio will be invalid as for every infinite particles, and LifeRatio based evolvers won't work and cannot be used (ie. Field evolvers). An option to enable this is exporting a life attribute and assign Life = life; but this will increase the simulation cache size.

Note that simulation cache fields are not initialzied in the Spawner Script.

Interpolation can be activated on a per field basis as long as an ID attribute was exported in the simulation. The ID attribute is used internally to keep track of particles. Except from the ID field, all simulation cache fields can be interpolated.

The P (vector) point attribute is automatically mapped to Position and is mandatory.

As of v1.11.3, points inside a simulation cannot be removed (ie. die), unless all points from the sim die at once:

Nothing changes regarding rendering, like all particles, you can apply any renderer you want to simulation cache particles (Billboard, Ribbon, ..).