First, we're going to create a new layer. In order to do this, right-click on the main 'Particle system' node in the particle treeview, and select 'New layer'. 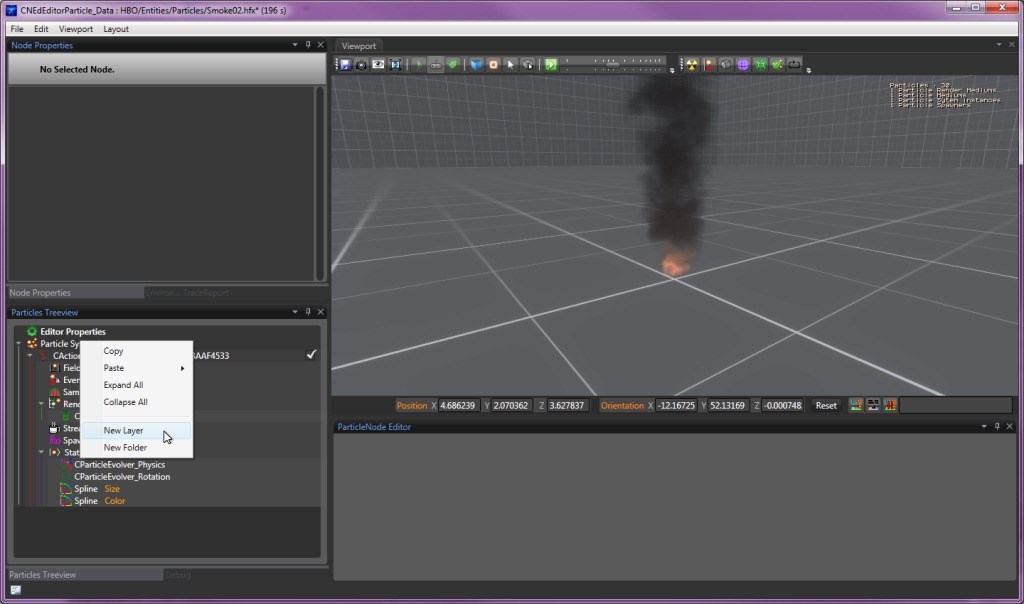 A new layer will appear. Reset the effect (

) to see the new layer.
If you configured the Effect to be infinite in the previous tutorial, make sure you do the same for this new layer, by checking the 'Infinite' box in the layer properties, in the node properties panel: 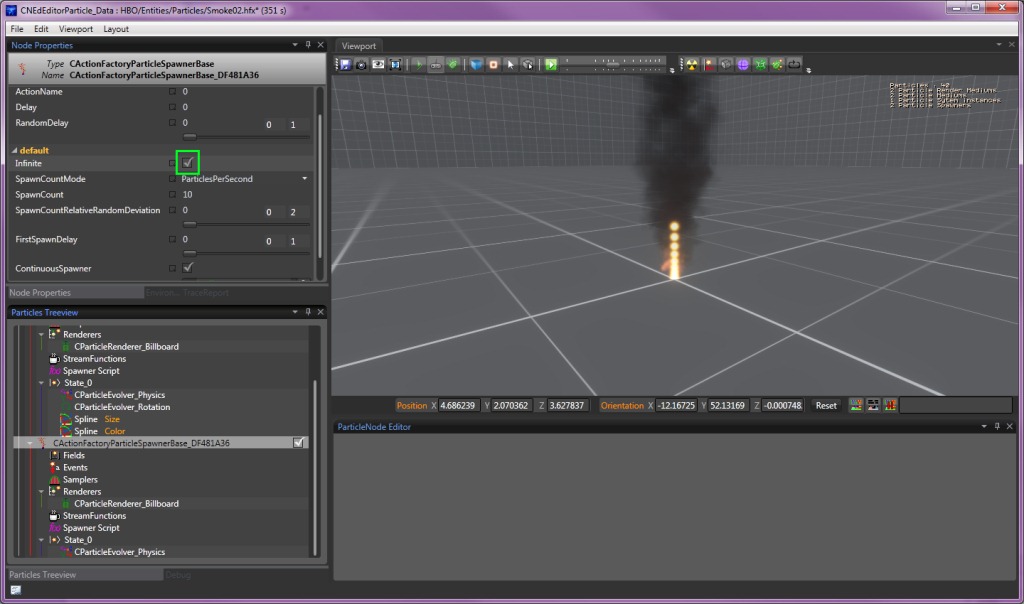 You can roll-up the layers to make the treeview cleaner to the eye, and rename them to more sensible names by double-clicking on their default generated names: 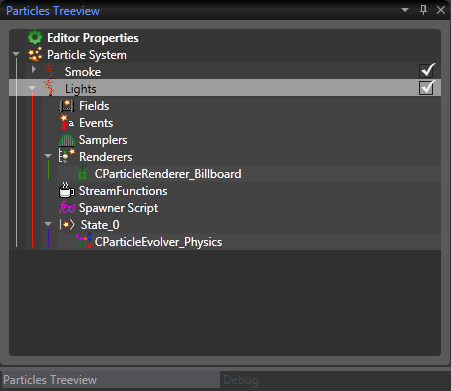 As the lights we're going to create will be static and won't be affected by physics, we won't need the physics evolver, so go ahead and delete it, either by: 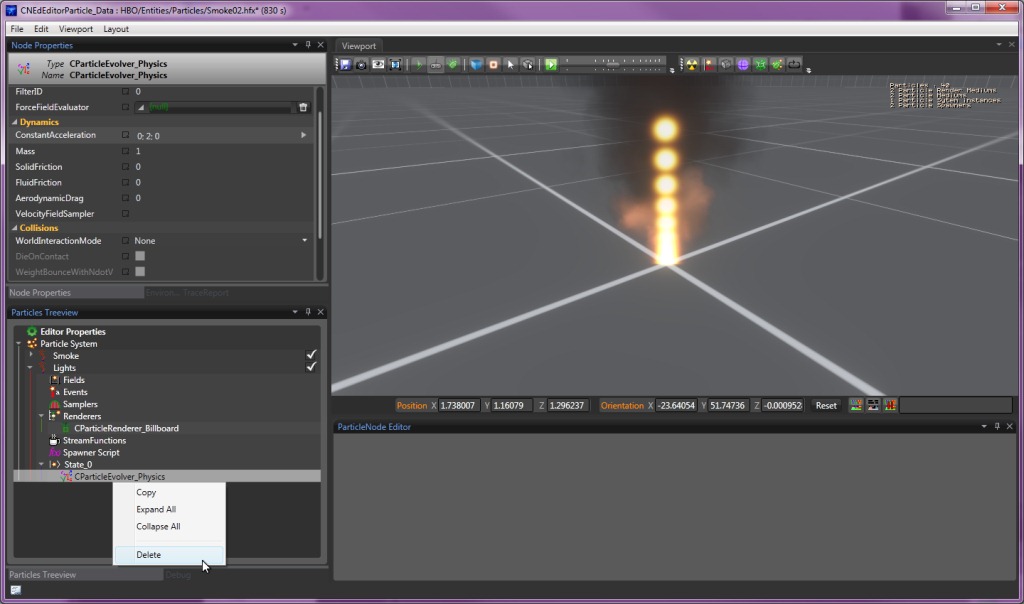 Once the physics evolver has been deleted, the new particles will stop moving.

We're also going to need a new Color field, and a color curve. If you're not sure how to create these, please see the smoke tutorial 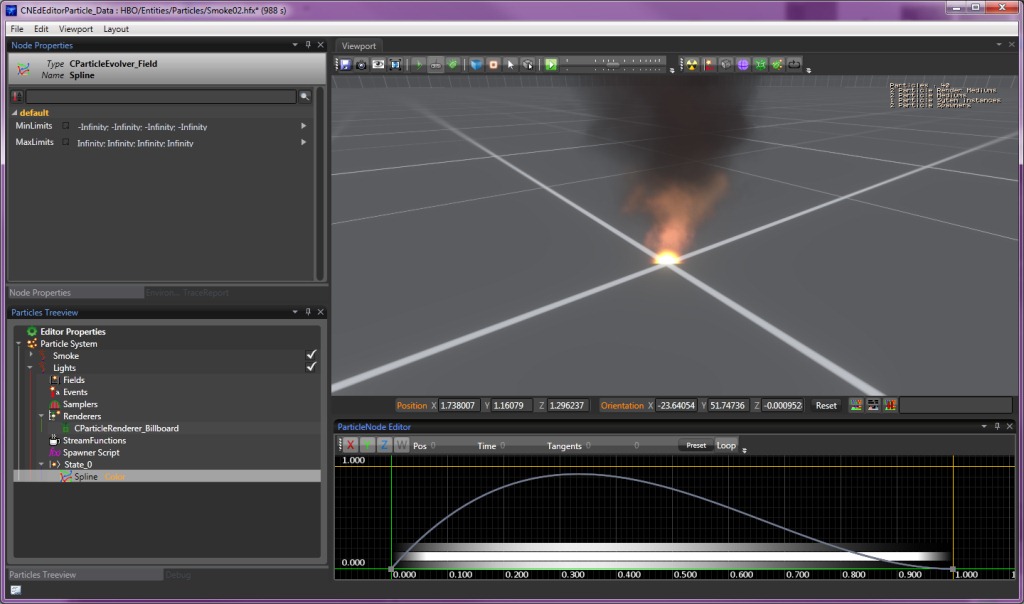 Now, for light particles, we don't want a billboard renderer, but a light renderer, so delete the 'CParticleRenderer_Billboard' node in the 'Renderers' section of the 'Lights' layer.

Then, right click on the 'Renderers' node, and select 'CParticleRenderer_Light' 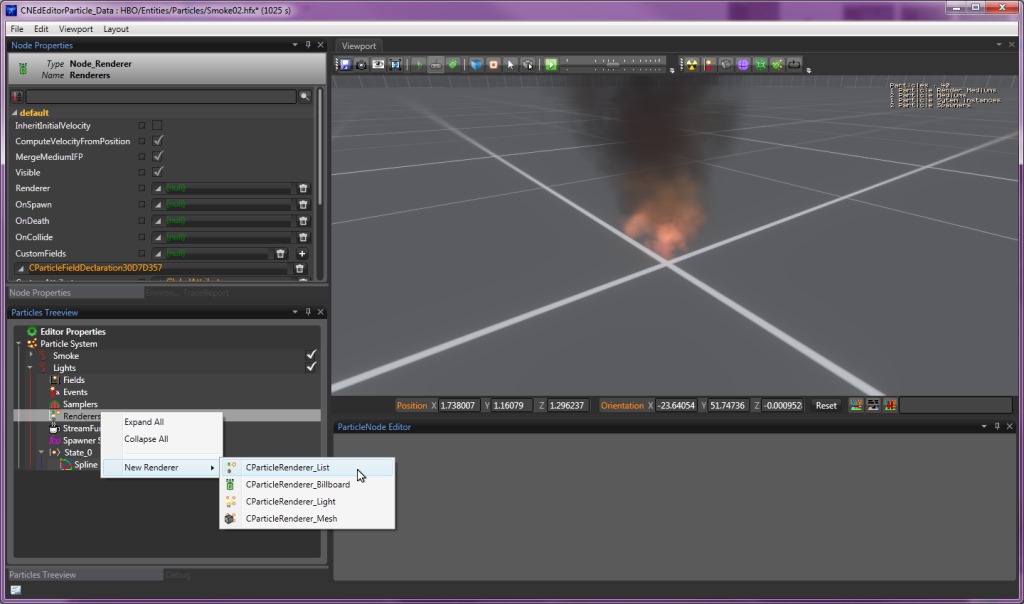 Right now, you shouldn't see anything, as the lights should be spawned on the ground plane, and are a bit too small, so we're going to select the Spawner Script, and change the size from the default 0.25 units to 2.5, and set the spawn position to something like float3(0,0.2,0):

You should see a small white light shining on the ground: 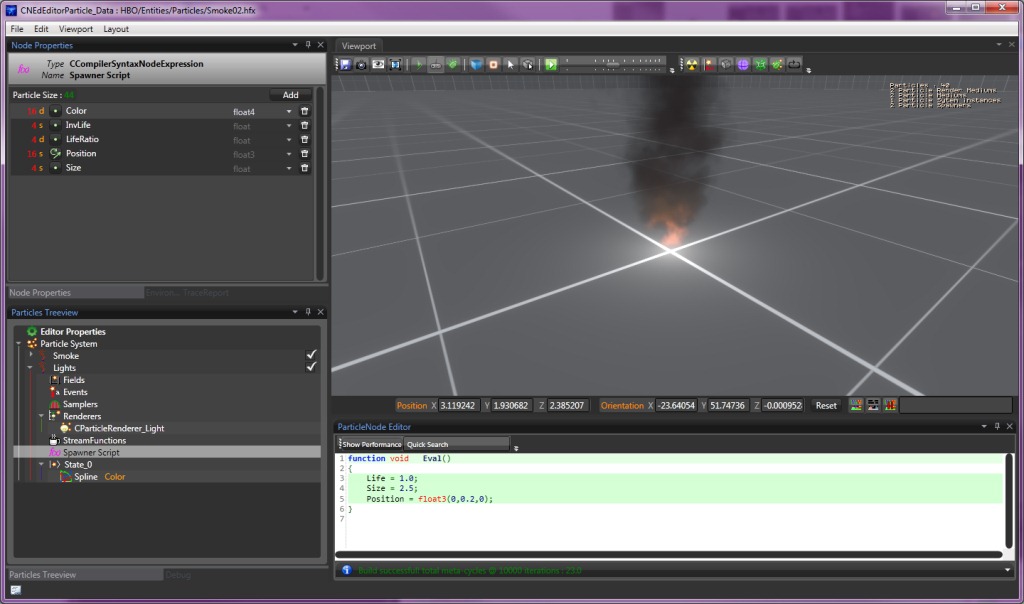 After tweaking the color curve to make the light more reddish, and spawning some additional effect instances with the [SPACE] key, the effect should look like this: 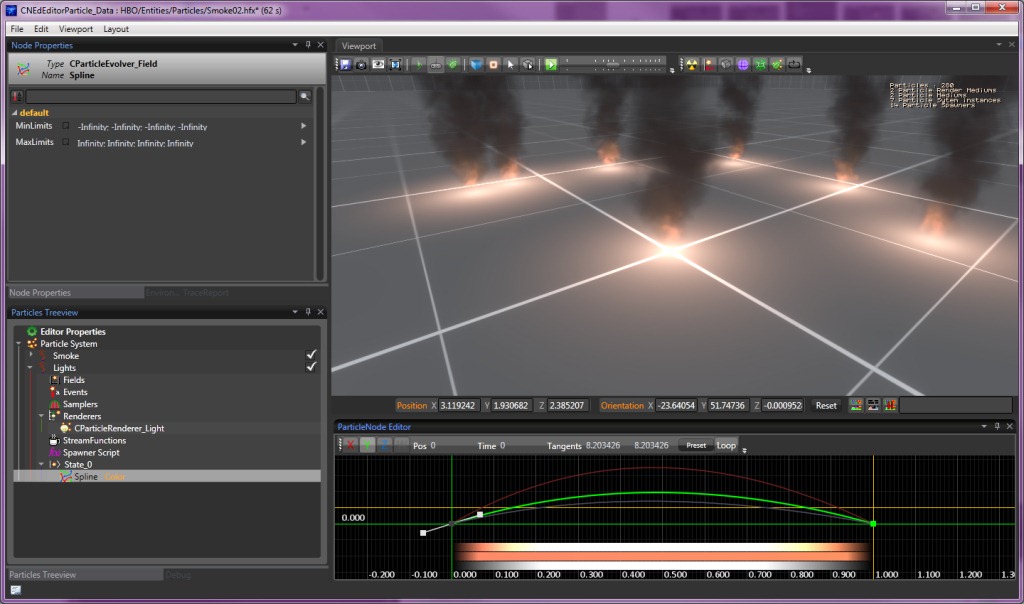 the hh-Fx editor provides a view of the internal engine's deffered buffers, and it can be useful when working with light particles, as you have access to the light-buffer, and can see more clearly the lights.

Hit [F4] multiple times to cycle through the intermediate render buffers, until you arrive at the one named 'Irradiance': 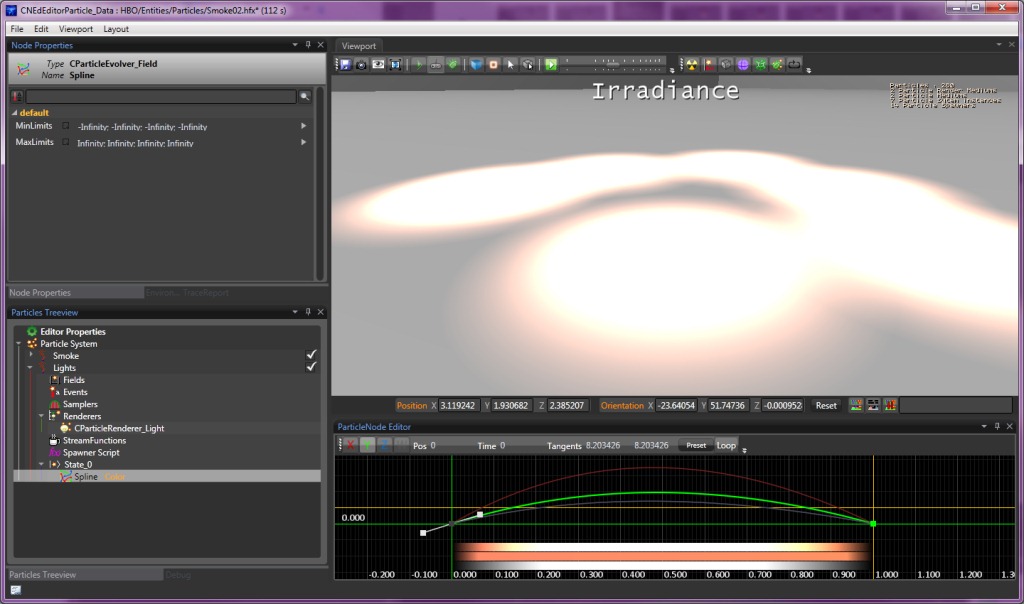 Just keep hitting [F4] to wrap back to the full rendering.

Now, something to be aware of is that by default, when creating a new layer, the generated particle spawner spawns 20 particles per second. Each light particle lives 1 second. This means that for a single instance of the effect, we've got 20 light particles. In the screenshots below, there are 8 instances spawned, that makes it 160 lights onscreen.

It's not necessarily bad, but in the current case, it's just plain useless. Select the 'Lights' layer, and lower the 'SpawnCount' value to around 1 particle per second: 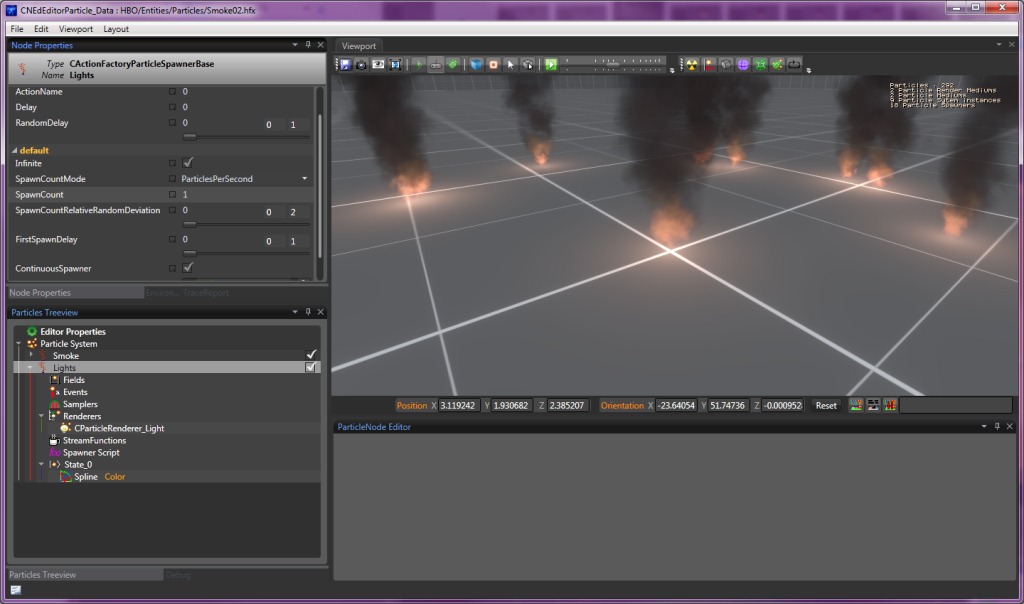 As our color/intensity curve is smooth, we still need a bit more than one particle per effect at any given time to have a smooth feeling, so we're going to bring the life of the light particles up a bit. just tweak that until it looks allright. between 2 and 3 seconds seems fine.

Also note that another useful render buffer is the one right before the Irradiance buffer. It's called 'light splatting' and basically shows you the overdraw generated by the light geometry (not just particles, the scene default spotlight goes through there too), this can be useful to spot heavy light-overdraw cases that would otherwise be easy to miss. 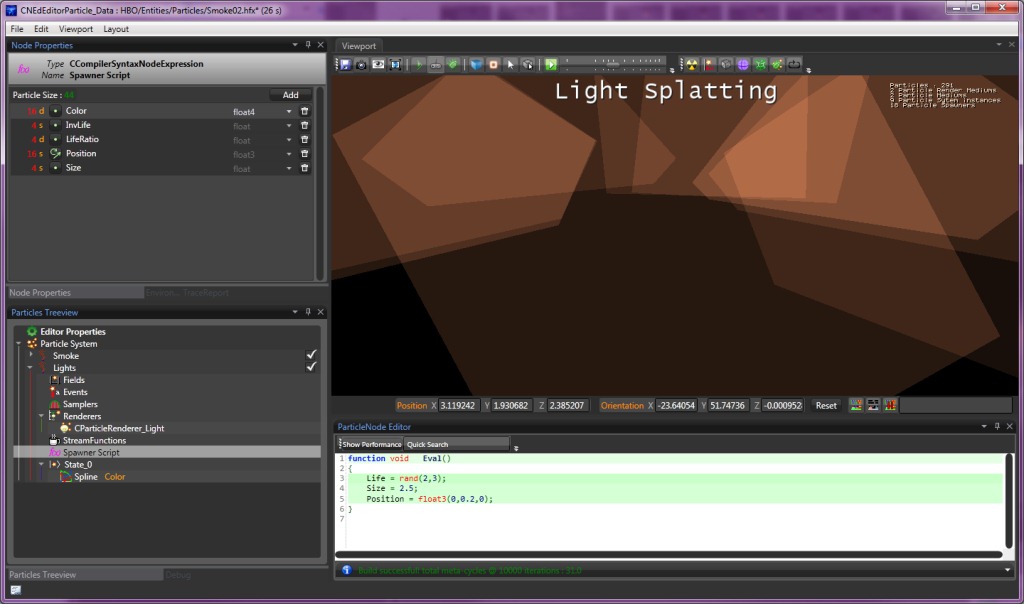 The light renderer lets you choose between two light materials: one purely diffuse (by default), and one that also renders specular highlights for each light particle:

The light falloff can be tweaked with the 'LightAttenuationSteepness' parameter.

This fire needs some flames. we're going to add some animated textures. 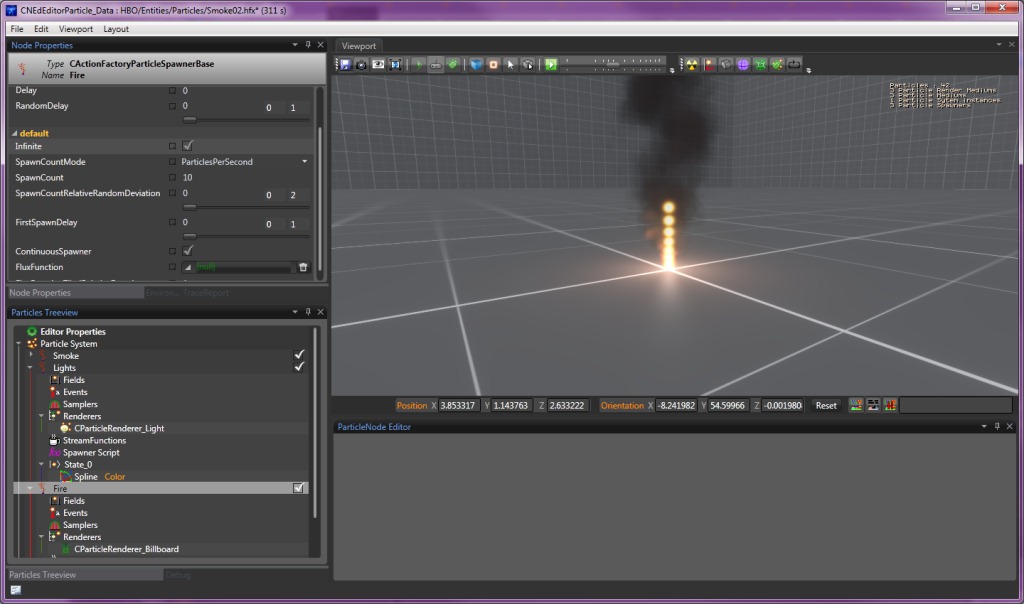 As in the smoke tutorial, by default, the first sub-texture will be displayed: 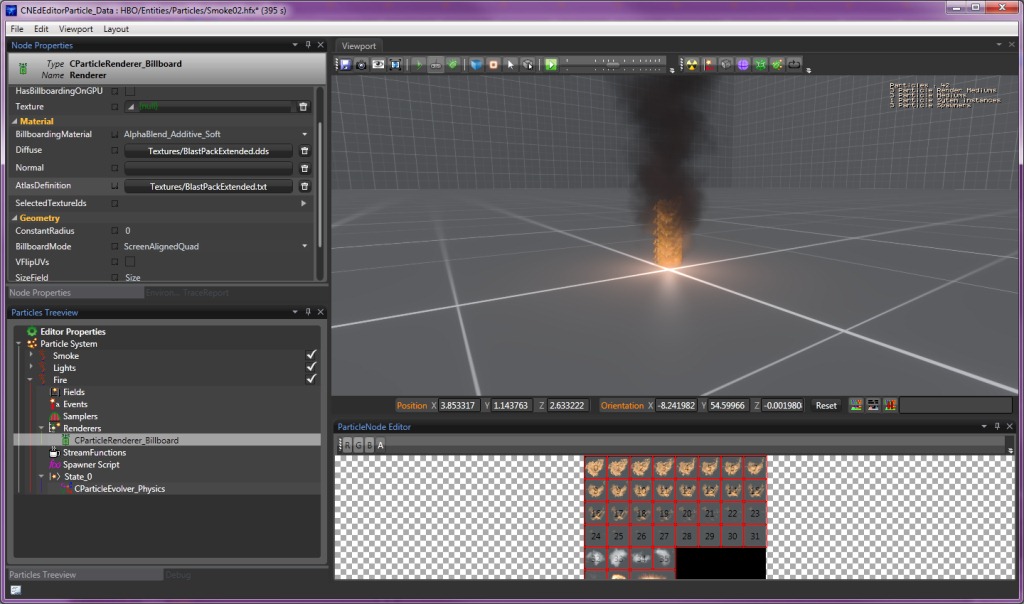 Looking at the atlas, we want to cycle through sub-textures 0 through 31, which are, in order, the 32 frames of the flame animation.

We already saw in the previous tutorial how to set a random sub-texture index for the smoke, by assigning a random value to the 'TextureID' field, inside the spawn script.

As the animation needs to be updated depending on the particle's life, we've got two options:

Both methods are fine, but for the sake of the tutorial, we're going to use the script.
Right-click on the evolvers list, and select 'New Evolver' > 'CParticleEvolver_Script' : 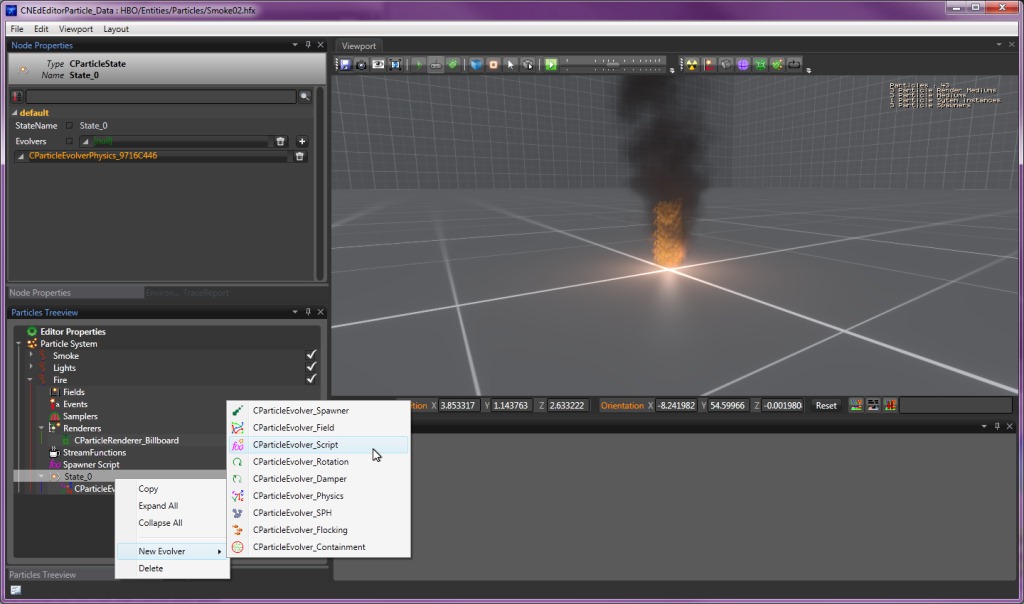 By default, as you can see in the script editor, by selecting the script evolver, an empty Eval() function is generated.

Therefore, if we want to make the TextureID progress linearly from 0 to 31 through the whole particle life, we just need to write:

By the way, having the smoke on top of the animated flame we're going to tweak makes it a bit hard to see things, so you can temporarily hide the smoke alltogether by unchecking the layer's visibility checkbox (on the right of the layer name): 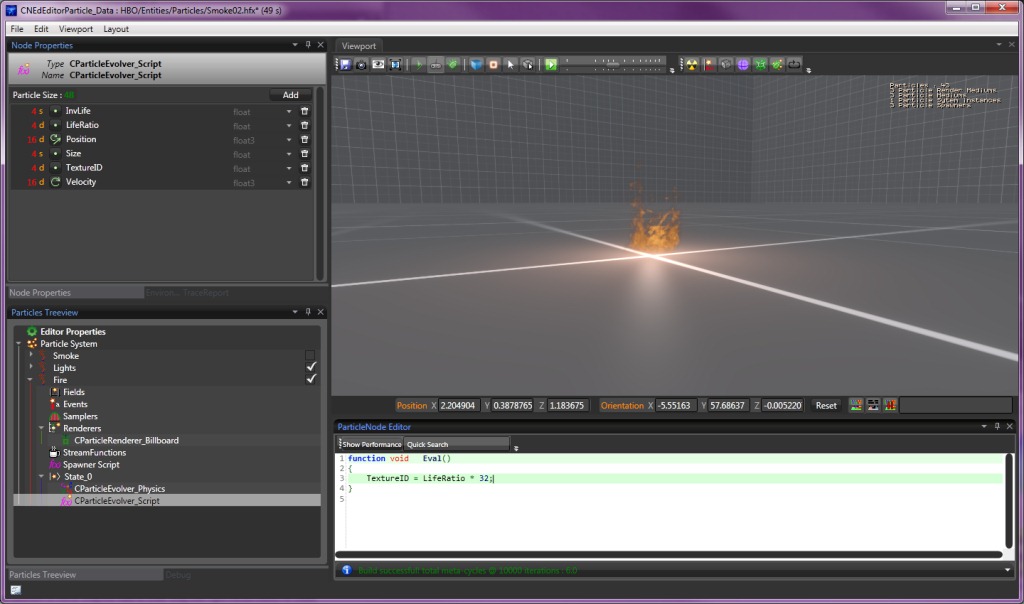 That already makes our sprite animate correctly.
Additionally, we can tweak some other parameters in the spawn script:

The particles spawn at y=0, therefore they're half in the ground, they also disappear a bit too quickly. Let's move them a bit higher and make them last a bit longer, and more randomly to give more variety to the effect.

In the spawn script: 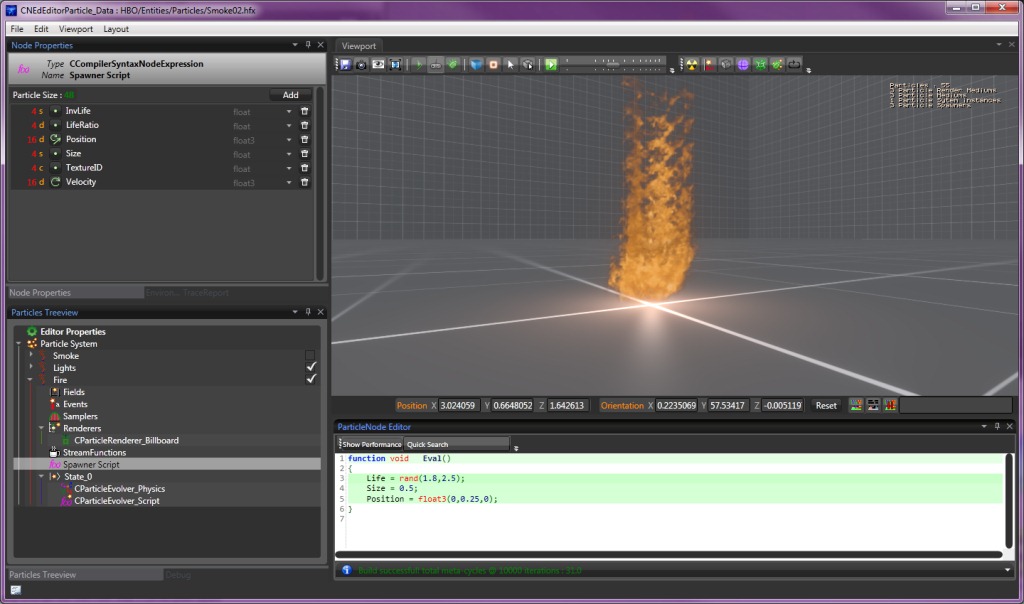 There are currently quite a lot of flame particles, and it makes it hard to see the animation, so just bring the SpawnCount in the particle spawner back to around 4 per second: 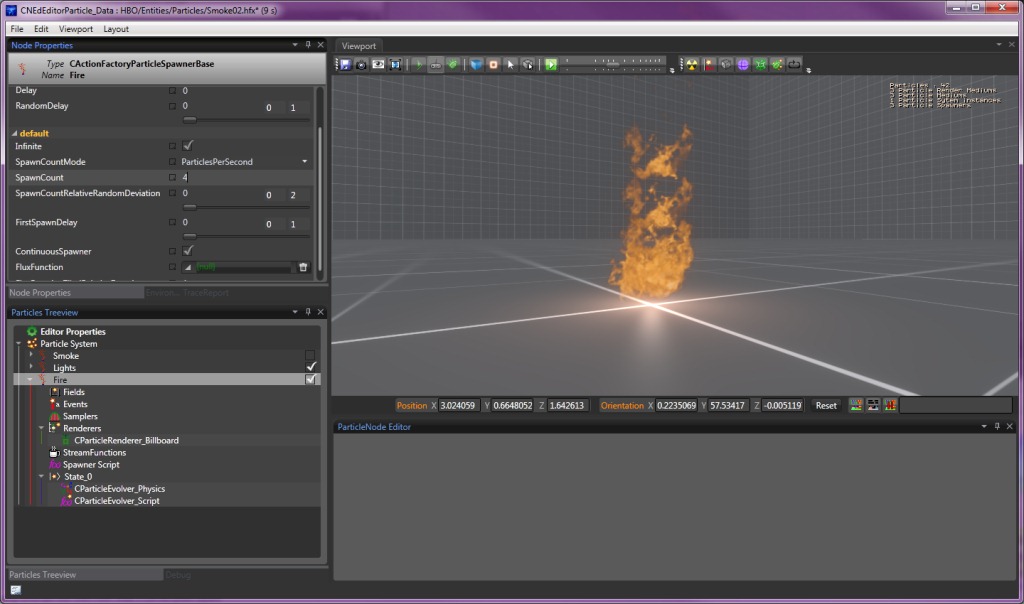 Now, let's add a color curve to control the particle's colors. Make sure the alpha stays at zero.

With the AlphaBlend_Additive* materials, this will make the particle additive.
We could use a purely additive material, but, as said in the smoke tutorial, it will batch poorly with the smoke particles, and some sorting problems will appear. 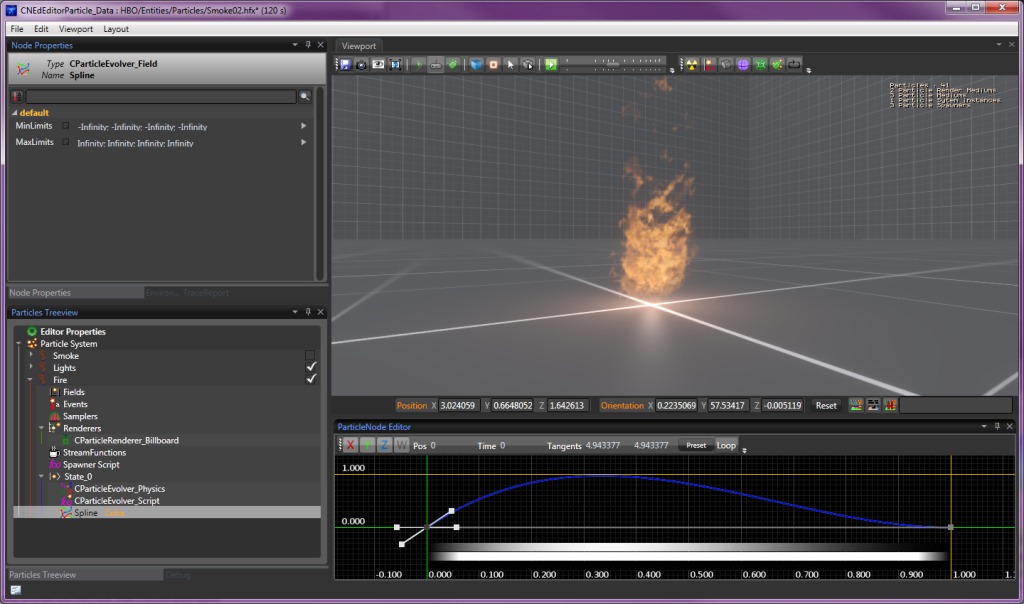 Boosting the color curves above 1 will make the sprites strongly emissive, and they'll start glowing, like intense flames. Just make sure you have the 'HDR/Glow' post-FX enabled, in the post-FX dropdown, in the realtime viewport's upper toolbar: 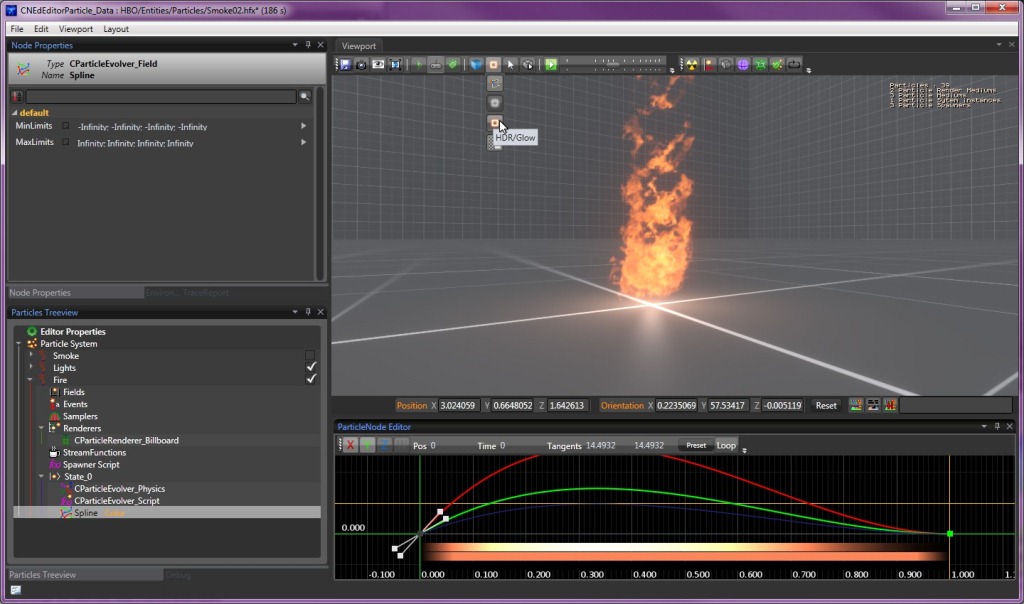 Just like with the smoke, to avoid the tiling effect, we're going to add a random rotation to our flames, with a CParticleEvolver_Rotation. 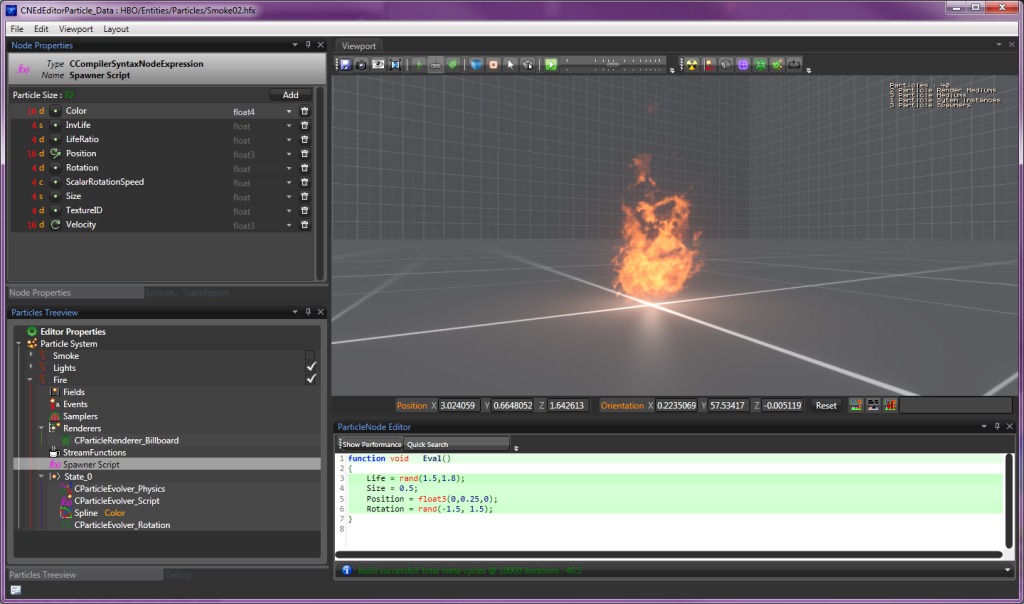 As the particles currently have a constant size, we can also notice some popping of the full-sized flame at the birth of every particle. even with a smoothly fading-in color curve, it's still noticeable. Just add a size curve to grow the particle smootly after birth: 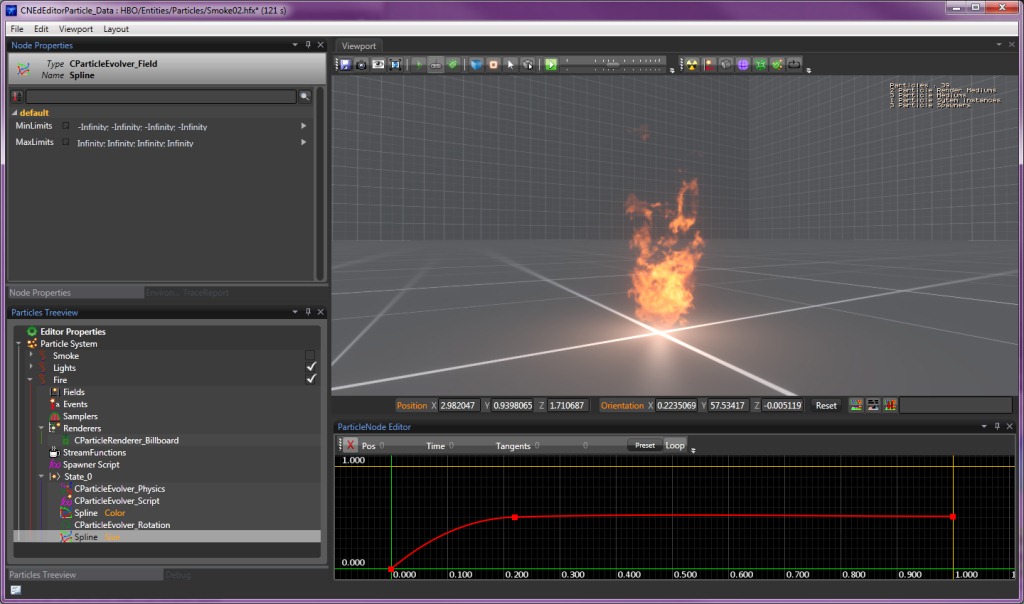 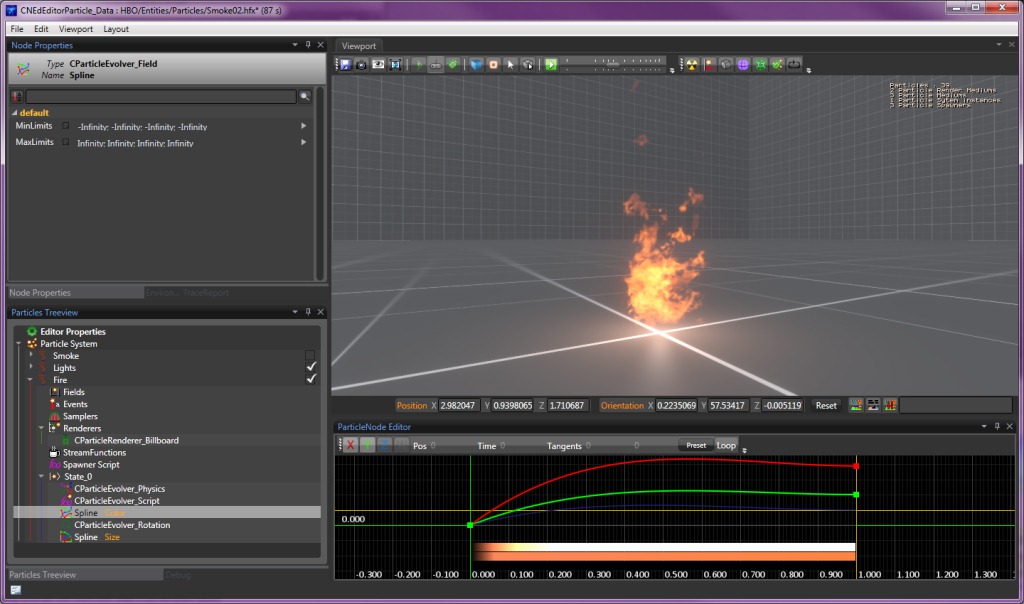 If we now unhide the smoke, we can see it's far from perfect, the flames are too big compared to the smoke, it doesn't appear to smoothly blend-in together. 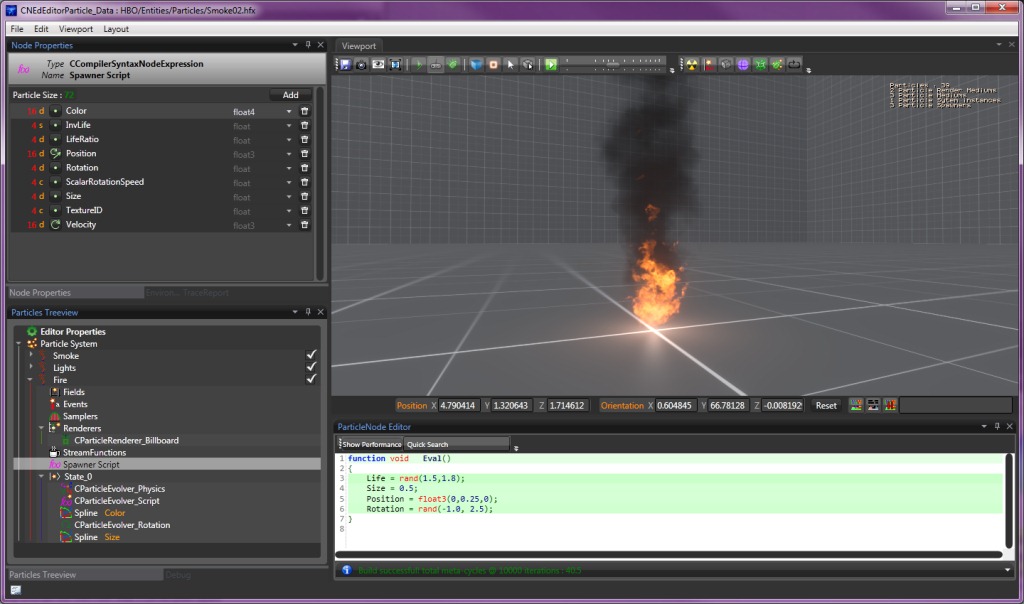 To fix this, we'll just rescale/tweak the smoke color curves so that it looks a bit nicer: 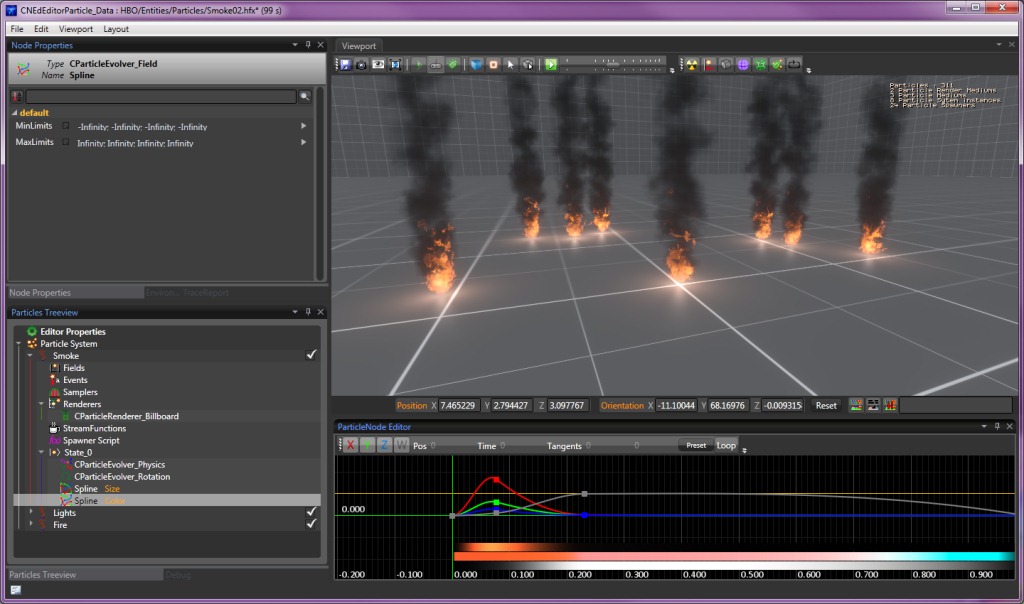 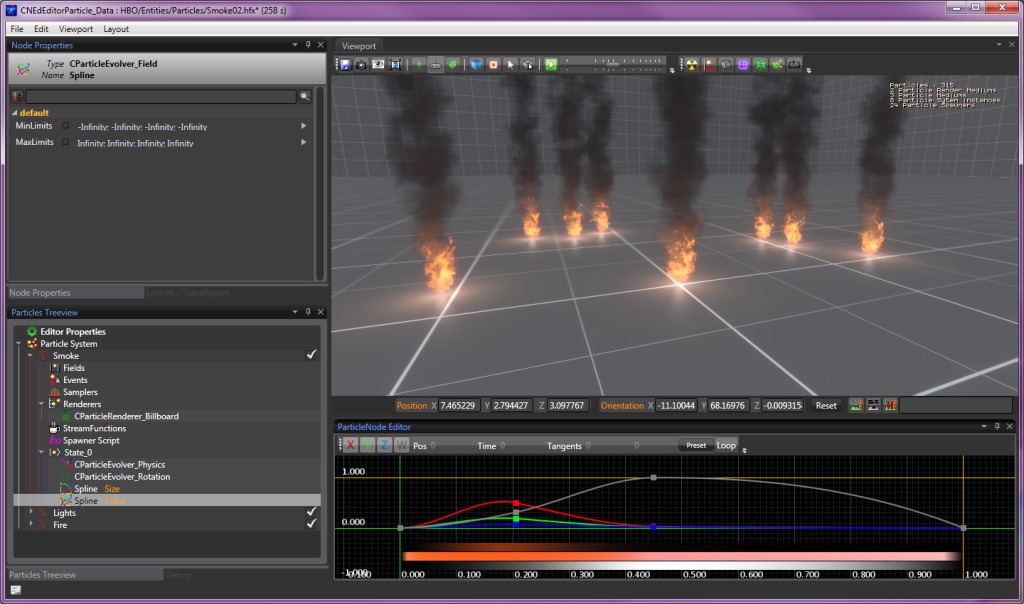 The last thing we'll see in this tutorial is the procedural turbulence sampler, to move the smoke column around like it's in turbulent air.

Right-click in the Samplers node, and select 'New Sampler' > 'CParticleSamplerProceduralTurbulence'. 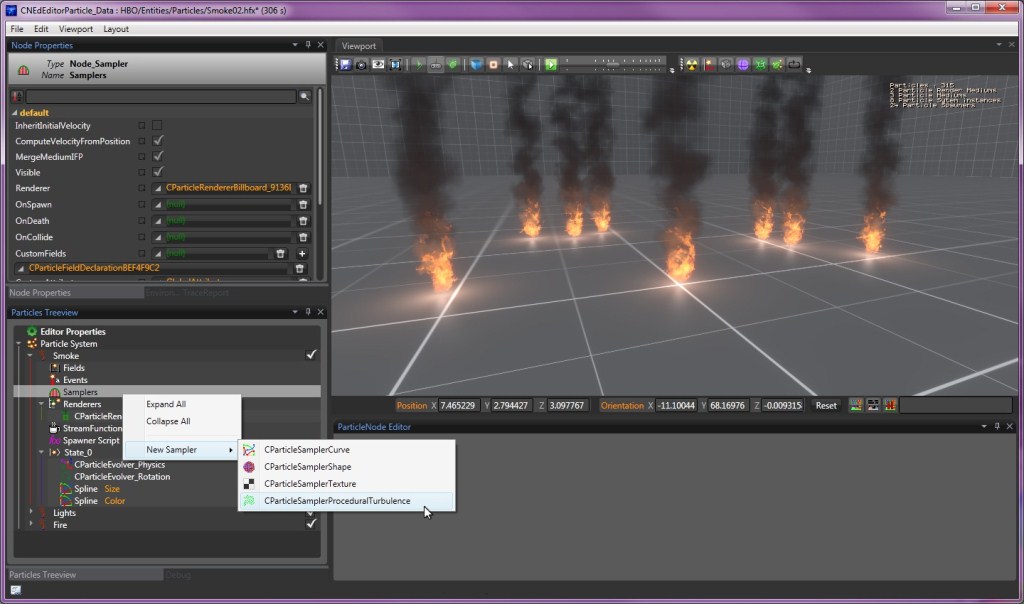 The new sampler will have a default name of 'Sampler_0'.

Now, if you select the physics evolver, you will notice a 'VelocityFieldSampler' field. just type in the name of the sampler you want to use as the velocity field. in this case, "Sampler_0".

/!\ The old "FluidFriction" and "StaticFriction" properties were simplified into a single "Drag" property. Also, FYI, the only working "DragType" right now is "Linear", we might remove this in the future, as we now only support linear drag anyway. 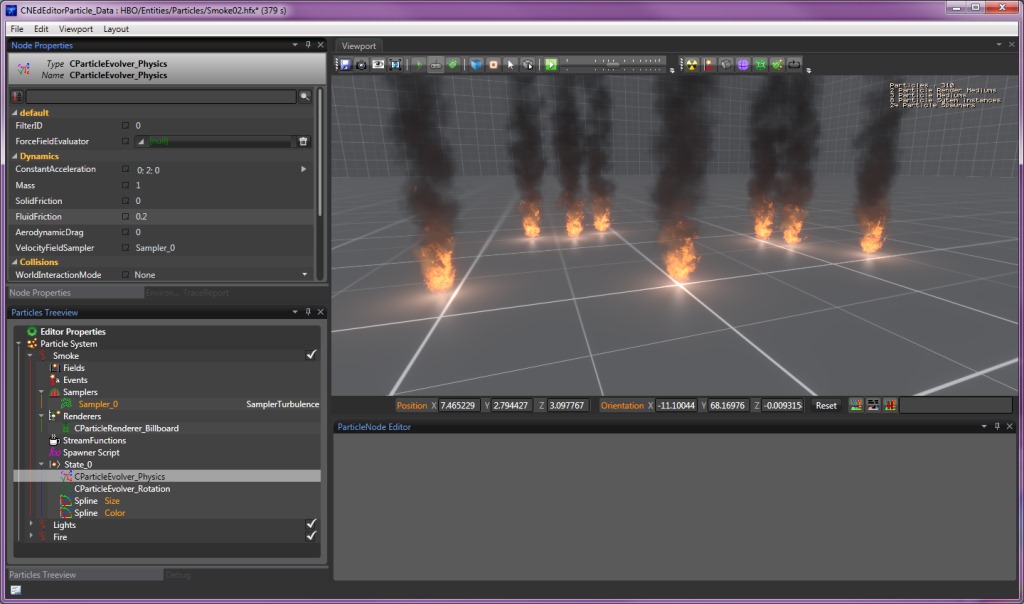 If you now select the procedural turbulence sampler, you can start playing around with the parameters, and see the effects in the realtime viewport.

The sampler also creates a debug visualization of its vector field, in the 'ParticleNode Editor' panel.

If you change, for example, the 'strength' parameter to 20, you'll see the smoke trails following curved paths. but the paths are fixed, they don't wiggle around like a real fluid turbulence would. 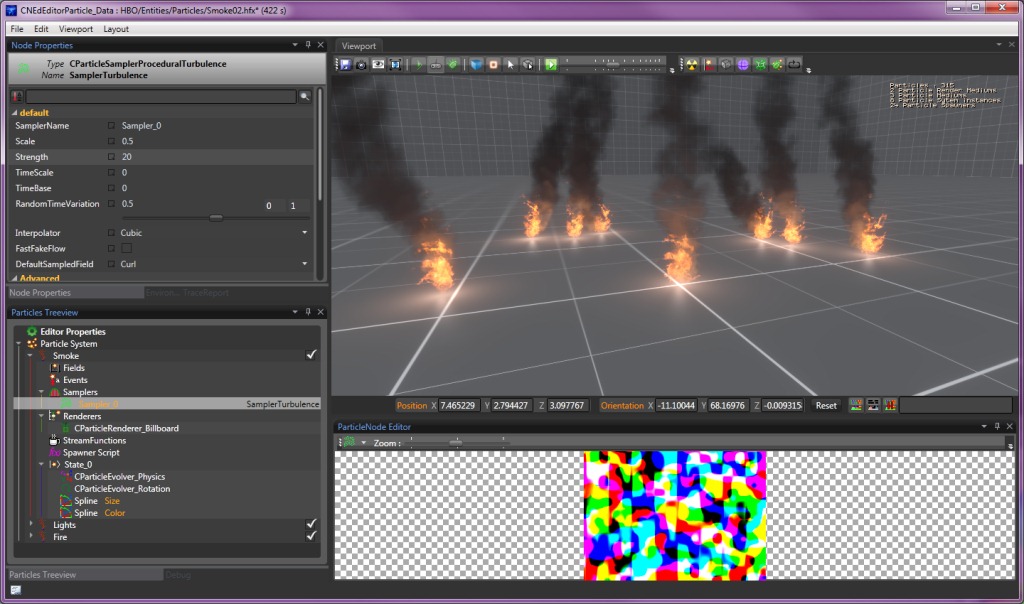 You can increase the 'RandomTimeVariation' parameter to make the repetition less obvious. 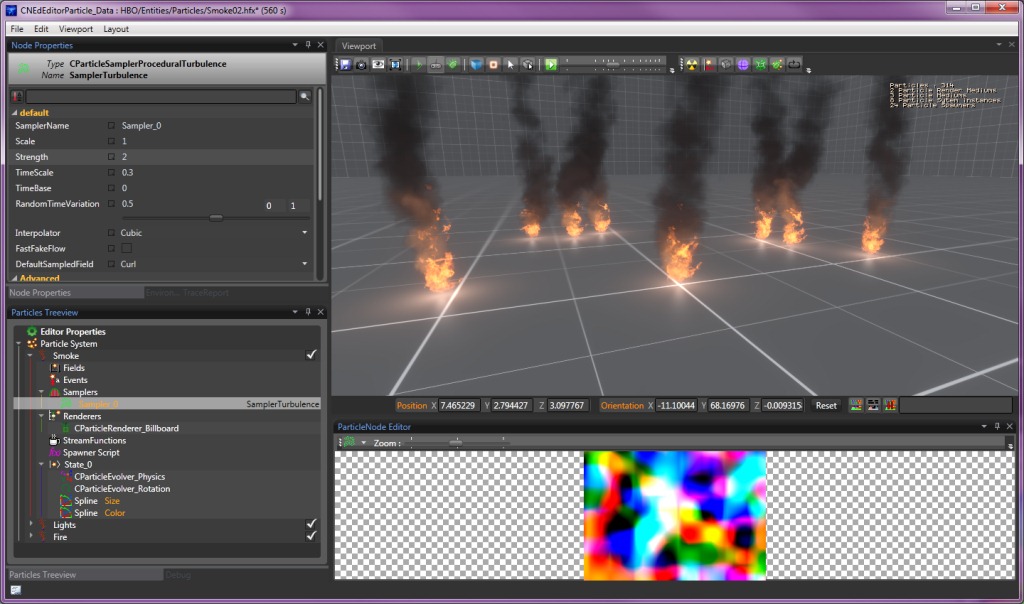 This gives us the final effect: 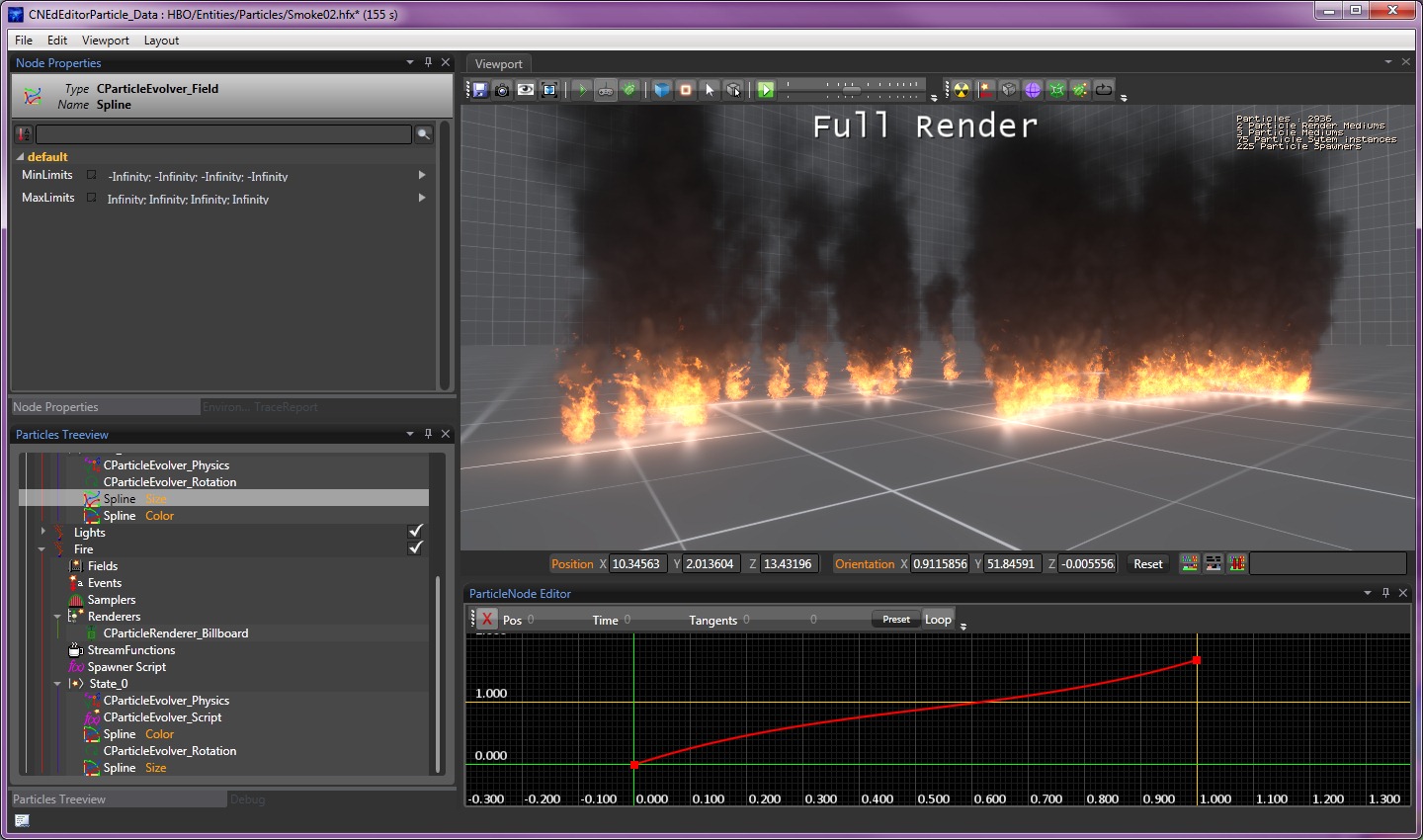