Particle effect attributes are vector values that can be accessed from scripts anywhere inside any layer of an effect. Particle attributes are useful to allow gameplay code to control particle effects behavior on a per-instance scale.
Since version 1.6.0, you can also publish

samplers as attribute-samplers, and have your shapes, curves, etc, changed or entirely overridden per-instance by the gameplay code.

The particle effect attributes panel is visible by default when opening the particle editor: 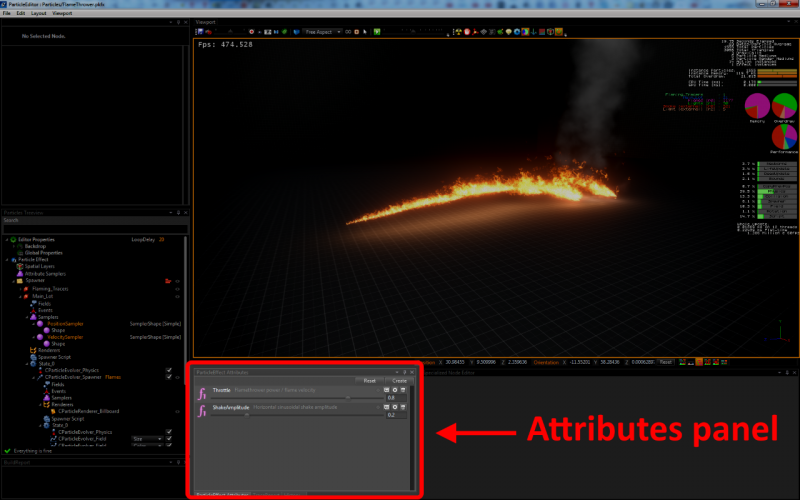 The attributes will appear inside the node properties panel.
Here are the attributes of the 'FlameThrower.pkfx' effect, in the default sample effects package:

Something to note about the quick-tweaking sliders is that they are not saved in the effect file. When opening the effect, they are set to the 'DefaultValue' of the attribute. Their sole purpose is to quickly check how the effect behaves when the attributes change. It allows you to emulate in the editor attribute modifications that would normally occur ingame.
The slider allows you to change the attribute of all spawned instances, between 'MinValue' and 'MaxValue'.

The editor uses the min and max values, wether or not 'HasMin' or 'HasMax' is checked, to setup the slider's range, so if your attribute requires no min and max, but you want to test its value between, say, -10 and 10, you'll just have to set the min/max values to -10 and 10, and keep 'HasMin' or 'HasMax' unchecked. This way, the game will still be able to set values below -10 and above 10, but you'll still have a slider to quickly test the attribute behavior in-editor.

If 'MinValue' is equal to 'MaxValue', The slider will effectively have a 0-wide range, and you will not be able to move it. that's expected behavior.

Attributes are automatically accessible from all the scripts of the particle system. They appear as a variable of type 'AttributeType', named 'AttributeName'.

For example, if we create a 'float2' attribute named 'TeamColor', containing the red and blue values of a team color, we can write inside a script:

(see swizzling) This will set the particle color to whatever the gameplay sets the 'TeamColor' attribute to.

Here is an example of the 'Throttle' attribute being moved around in the effect 'FlameThrower.pkfx' coming in the base samples package.
The attribute is primarily used to control the spawn velocity of the tracer particles that spawn the flame trails:

Note that the Velocity is initialized with a stream function (which is a shape sampler) before the spawn script is run, and we're just scaling the sampled velocity

Deprecated v1.10.0, use the view functions instead


If you create the following attributes, the editor will recognize them, and set them each frame to the corresponding viewport's camera data:

Since version 1.6.0, you can also publish

samplers as attribute-samplers, and have your shapes, curves, etc, changed or entirely overridden per-instance by the gameplay code.