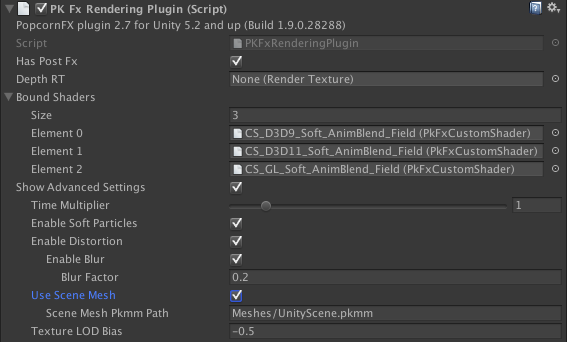 This is the rendering component. Attach it to your camera to have Popcorn in your scene.
The "Build" version number corresponds to the version of the PopcornFx runtime and subsequently of the compatible PopcornFx editor. Only the first 2 numbers, respectively major and minor version numbers are relevant, the following (respectively patch and commit number) can be safely ignored as far as effects compatibility is concerned.

Needs to be enabled if your camera has post effects to prevent axis flipping in the particles rendering.

Automatically enabled when distortions are enabled (see below).

Depth texture, used for soft particles and distortions when enabled.
Can be reused for image effects.
Access through scripts with m_DepthRT

Enables soft particles on effects that support it (see example).

Enables distortions in effects that support it.

Adjusts the amplitude of the blur.

Path relative to the PackFx root to the scene mesh (see PKFxSceneMeshBuilder).