The physics evolver is the most frequently found evolver in a standard particle evolve state. It is the main dynamics evolver, that will make your particles move with velocity, acceleration, friction, force-fields, velocity fields, and scene interactions (collisions and impulse distribution in your own physical simulation, allowing you to create particles that will actually push your own physics objects around in your scene) 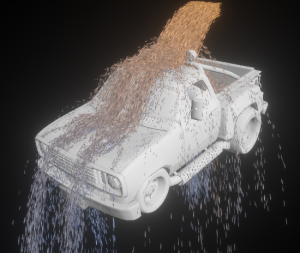 The physics evolver automatically creates, if they don't exist, the following particle fields:

For the sake of the demonstration, the timestep has been exaggerately increased : The framerate was clamped to 15 fps, and the time scale was set to 4x, producing huge simulation steps of 4 * (1/15) = 0.26 seconds per frame. (when usually, the steps are closer to 0.016 seconds per frame)

At normal framerates and time scales, fountains 4 is strictly identical to fountain 1, same goes for fountains 3 and 2. 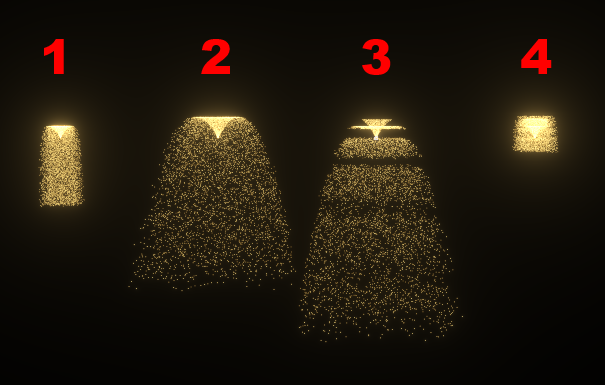 As you can see, the fountains 3 and 4 differ pretty badly from the reference shape of fountains 1 and 2, due only to the approximations of the 'Fast' version.

You can tell the physics evolver which one it should use, using the 'IntegrationStrategy' property.
There is also a third option in addition to 'Fast' and 'Stable', which is the default value when creating a new physics evolver: 'Adaptive'

The 'Adaptive' mode will basically switch between 'Fast' and 'Stable' based on the input timestep. it the timestep becomes larger than the value in the 'IntegrationDtTreshold' property, the evolver will switch to the 'Stable' version. If it gets lower, it will switch back to the 'Fast' version.

Dealing with turbulences at low framerates

Even with the 'Stable' integrator, there can be visual glitches when sampling

turbulences in the physics evolver.
At high framerates, the particles will precisely follow the turbulent flow. At low framerates, they will appear as drifting away from it, and/or following a coarser version of the flow.

To address that issue, we first have to understand why. Here are a few pictures illustrating what happens at different framerates to a particle advected across a turbulent flow:

evolve states. They basically allow you to tell the state to subdivite its update step into multiple sub-updates if the framerate gets too low, keeping the sampling errors low.

To customize the Micro-Updates behavior, click on the particle state in the treeview, and tweak the following properties: